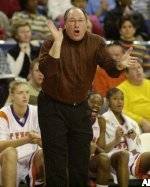 Davis compiled a record of 355-197 for his 18 years and leaves the sidelines as the winningest coach in Clemson basketball history, men’s or women’s programs.

“I have been blessed to serve as the women’s basketball coach at Clemson for the last 18 years,” said Davis, who has been at Clemson since 1987. “I have grown to love this University and its people. I have the utmost respect for Terry Don Phillips and his vision for this department and I am looking forward to serving Clemson in this new capacity.

“I want to thank all the players, coaches and support personnel who have been a part of this program in the last 18 years. I have been fortunate to work with quality young people my entire career.”

“Clemson athletics is indebted to Jim Davis for his many years of outstanding service to the University as its women’s basketball coach,” said Athletic Director Dr. Terry Don Phillips. “His record on the court speaks for itself, and it clearly shows that he is a great basketball coach. They are standards that will be difficult to equal. But, more importantly, his record as a human being is something that our community, state and University will always hold in high esteem. We are delighted that he will continue to be a part of the Clemson program.”

Clemson will begin a national search for its new coach immediately. Davis took Clemson to 14 of Clemson’s 15 appearances in the NCAA tournament, including each of his first six seasons as Clemson head coach. Four times he took the Lady Tigers to the Sweet 16 (1989, 1990, 1991 and 1999), including an Elite Eight appearance in 1991. He coached 16 All-ACC players, including three who were named to the ACC’s 50-Year Anniversary Team two years ago.

Off the court, every one of his student-athletes who remained at Clemson through the end of their eligibility earned a degree from Clemson or are still in school at this time.

Davis was a model of consistency, leading Clemson to postseason play in 16 of his 18 years as the head coach, including at least 20 victories in each of his first five years and eight of the first nine. His 1998-99 team won a school record 26 games on the way to a 26-6 record, the ACC Championship and a number-10 final ranking according to the Associated Press. His 1991 team that reached he Elite Eight of the NCAA tournament ranked eighth in the final USA Today coaches poll, the highest final ranking in Clemson women’s basketball history.

The native of Englewood, TN had consistent success in the ACC tournament, winning at least one tournament game in each of his first seven years and 11 of the first 12. He had a 10-2 record in the ACC Tournament, including two championship runs between 1996 and 1999.

His 51 wins over top 25 teams included two victories over the number-one ranked team, the only two times the Lady Tigers have upset the nation’s top team. Those victories took place on March 3, 1991 when Clemson defeated #1 Virginia in the ACC Tournament in Fayetteville, NC, and on Feb. 15, 1992 when Clemson downed a number-one ranked Maryland team at Clemson, 72-55. Included in his 51 top 25 wins were 21 wins over top 10 teams and 10 over top five teams.

For his 19 years as a Division I head coach Davis posted a record of 374-205. He coached at Middle Tennessee State the year before he came to Clemson, and compiled a 19-8 record. Prior to that he served at Roane State for six years, where he was 127-35. His 1984 team finished 27-2 and won the National Junior College Athletic Association Championship. He also posted a 197-93 record for 10 seasons as a high school coach.

Davis, a 1970 Tennessee Wesleyan graduate, is married to the former Bobbie Henderson and they have one son, Todd. Todd and his wife Rhonda have two children, Ansleigh Grace and Jacob Garrett.