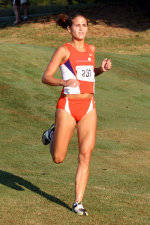 Greensboro, NC – Clemson’s Jenny Barton was announced as the ACC Cross Country Performer of the Week on Monday. The senior from Toledo, OH placed eighth in the 5K Furman Invitational on Saturday with a time of 19:31.51. The eighth place finish marked the third time in four events this season Barton has earned a top 10 spot.

This marks the first such honor in Barton’s career. Earlier this season, she claimed the Gamecock Invitational and S.C. Collegiate Championship in back-to-back races. Her career-best effort of 18:29 came in the Clemson Invitational on September 10. The two-time all-state performer also holds the Clemson record in the 3000m steeplechase on the track.