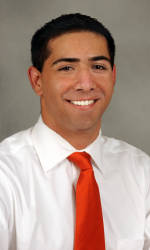 CLEMSON, SC – Jeff Kallin has been named assistant sports information director at Clemson, the school announced Monday. Kallin, a graduate assistant with the school’s sports information office since 2007, accepted the promotion after earning his master’s degree this past weekend. He takes over for Christine Long, who has enrolled in the Villanova University School of Law. Kallin will be the primary contact for the women’s basketball, women’s tennis and volleyball teams.

Kallin is certainly no stranger to Tiger athletics. As an undergraduate, he served the men’s basketball program as a team manager for three seasons, from 2004-07. He was head manager for Clemson when it won a school-record 25 games and advanced to the championship game of the NIT in 2007.

After graduating with a bachelor’s degree in sport management, he took a graduate assistantship within the sports information office. He served as the primary publicist for the swimming & diving program for two years. He also played an integral role on the stat crews for men’s basketball, women’s basketball, football and women’s soccer.

Kallin contributed numerous publication and project designs for the department in his two years as graduate assistant. His most notable project was the design of the life-sized C.J. Spiller poster, which has been submitted to 700 national media in support of the star football player’s Heisman Trophy campaign. His 2008-09 swimming & diving media guide cover was a finalist for Cover-of-the-Year by Swimming World Magazine.