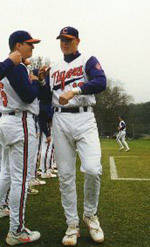 CLEMSON, S.C. – The fifth-ranked baseball team avenged its season opening loss to Richmond with a 14-4 win on Saturday in front of 2,374 fans at Doug Kingsmore Stadium.

Shortstop Jeff Baker and first baseman Jarrod Schmidt hit back-to-back home runs in the first inning and Baker added a grand slam in the second to led the offensive assault.

Starting pitcher Kevin Lynn pitched five and one-third strong innings to pick up the win. Lynn yielded only one earned run, two hits and two walks while striking out five of the 21 batters he faced. Richmond starter Thomas Martin lasted only 2/3 of an inning and was credited with the loss.

Clemson’s big first inning started with two outs when Khalil Greene singled to left field. Baker then hit a towering blast over the left field fence for his first home run of the year and Schmidt followed with a home run of his own to give the Tigers a 3-0 lead. The back-to-back feat was last accomplished by Greene and Baker on April 30, 2000 at Georgia Tech.

The onslaught continued in the second inning. Designated hitter Russell Triplett and catcher Seth Miller led off the inning with singles and right fielder Casey Stone was hit by a pitch to load the bases. Miller scored on a balk by Spider pitcher Bake Leonards and Greene reached on an error to load the bases once again. Baker hit a 3-0 pitch out of the ballpark for his first career grand slam to give Clemson an 8-0.

The Tigers would stretch their lead to 9-0 when Greene drove in Stone in the bottom of the third. Greene, Stone and Baker all went 3-4 from the plate on Saturday.

Richmond got on the board in the sixth inning when Vito Chiaravalloti hit a ball that bounced off Lynn, allowing runner Bryan Prtiz to score. Later in the inning, third baseman Matt Craig scored after a balk by relief pitcher Thomas Boozer was called for a balk and the Spiders cut the deficit to 9-2.

The teams conclude their series on Sunday at 1:00 PM. The game will be broadcast on WCSZ-AM (1070) in Greenville.