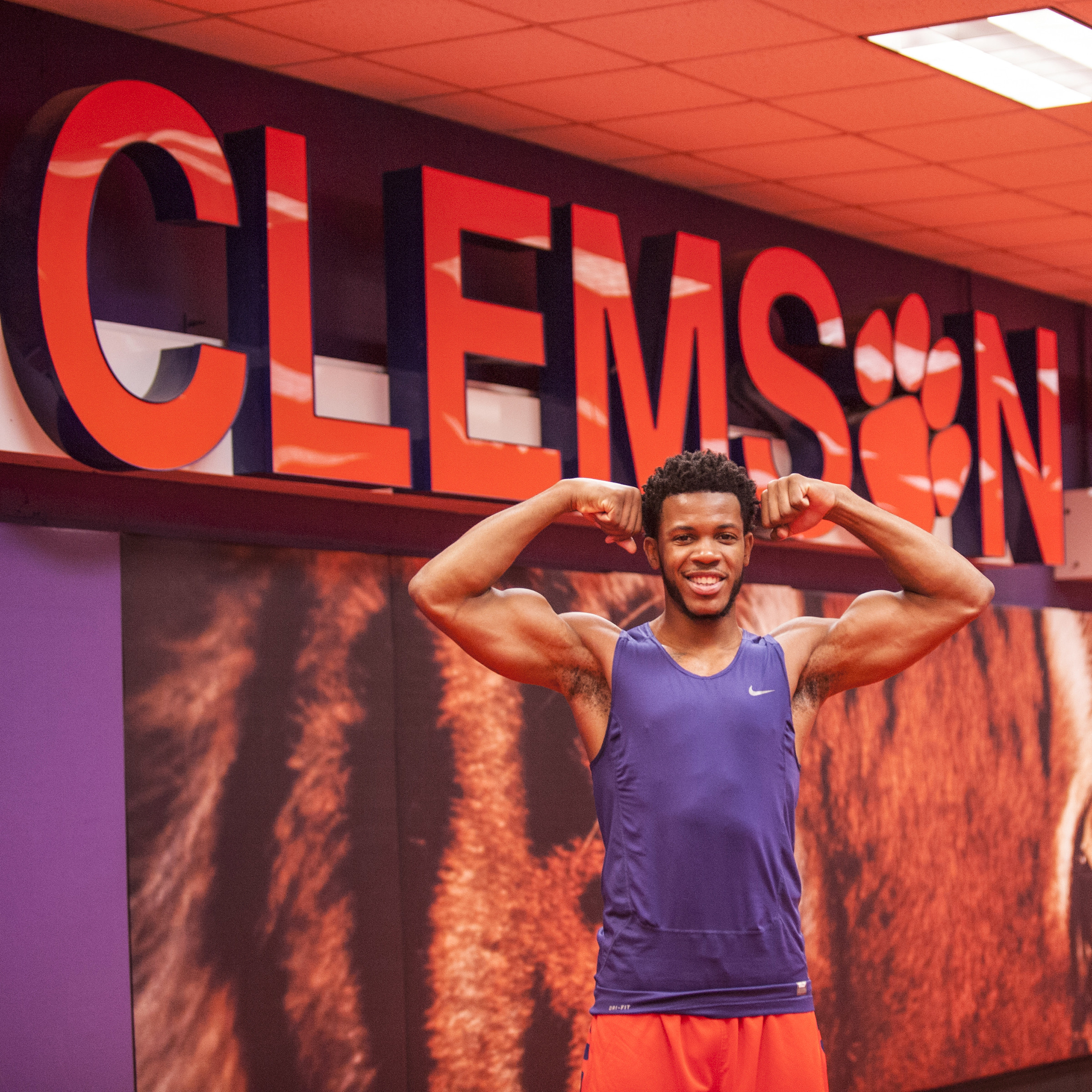 Jaron Blossomgame had a breakout year for the Clemson men’s basketball team last season, becoming the first freshman or sophomore in 20 years (Greg Buckner) to lead the Tigers in both scoring and rebounding. As a redshirt sophomore in 2014-15, Blossomgame started all 31 games, averaging 13.1 points and 8.2 rebounds per game.

In his first two seasons on the hardwood, Blossomgame has earned a reputation as a ferocious rebounder as well as a potent offensive threat with the ability to dunk on almost anyone. But in the spring of 2012, Blossomgame found himself lying on an empty gym floor without feeling in his left foot, waiting for an ambulance and wondering if he would ever play basketball again.

Blossomgame, a four-star product out of Alpharetta, Ga., signed his letter of intent to play basketball at Clemson in the fall of 2011. He averaged 25.8 points per game as a senior at Chattahoochee High School, earning all-state honors. In April, following a standout senior season, Blossomgame was working out with his AAU coach at a local high school when he began to feel pain in his leg during a drill.

“I ran back to half-court to finish the drill,” remembered Blossomgame.

As he dribbled toward the free-throw line, he began to gather himself to take off for a dunk, one he had executed countless time before.

“I exploded off the floor and heard a loud pop,” said Blossomgame. “Next thing I know I’m on the ground. I just fell out of nowhere.”

Blossomgame had suffered a compound fracture (tibia and fibula). His injury, much like the injury Louisville player Kevin Ware suffered in a nationally televised NCAA Tournament game in 2013, was severe to the point where his bone was protruding out of his leg, and he no longer had feeling or control of his foot.

“I was thinking…am I going to be able to play basketball anymore?”

Blossomgame redshirted the 2012-13 season. He spent the year on the sidelines of both practices and games, watching, learning and patiently waiting for his leg to heal.

“I learned a lot on and off the court that season,” Blossomgame said of his redshirt year. “I wished I could be out there with my teammates, but I knew I couldn’t do anything about it.”

He was finally cleared to participate in full practice in September 2013 and took the court for this first game in a Clemson uniform on Nov. 8, 2013, a full 18 months after his injury occurred.

“I was really nervous,” admitted Blossomgame. “I didn’t want to tell people, but after an injury like that, it’s always in the back of your mind.”

Despite his early nerves, Blossomgame had a stellar freshman season, starting 30 games on a team that went 24-12 and advanced to the Final Four of the NIT.

“It was a really fun season,” he recalled. “It was great playing with K.J. McDaniels. He showed me what it meant to be a leader.”

Blossomgame’s breakout game came in a win over No. 13 Duke, when he led the Tigers with 14 points and 14 rebounds. Blossomgame earned ACC Rookie-of-the-Week honors for his performance. However, after a winning season and a solid freshman campaign, he was not satisfied.

“In my honest opinion, I had a rough freshman year,” confessed Blossomgame. “However, I learned what improvements I needed to make.”

In the summer between his redshirt freshman and sophomore seasons, he spent countless hours in the gym, working on his craft. He became known for this work ethic that summer, as he was determined to prove he could become the Tigers’ go-to guy.

“When K.J., left, that opened up an opportunity for someone else to step up. I worked really hard that summer on all different aspects of my game, and I think that allowed me to fill the void he left.”

In his sophomore season, much like he did against Duke as a freshman, Blossomgame further proved that he was not afraid of the spotlight. In the Tigers’ seven games against ranked opponents in 2014-15, he averaged 17.2 points per contest.

“Playing ranked teams gives you an opportunity to do something on a big stage. I’m not scared to step up and be the guy.”

In addition to the work Blossomgame put in this summer in Clemson preparing for his junior season, he also attended an NBA Vet Camp in Indianapolis, Ind., where his talents were on full display. He worked out and competed with NBA players Josh McRoberts, Gordon Hayward and Rodney Hood while at the camp.

“It was awesome to play and interact with those players,” said Blossomgame. “I saw the size and speed of the game and realized I could play with them.”

McRoberts, a Miami Heat forward and former Duke standout, took Blossomgame under his wing during the camp. The two exchanged numbers and still keep in touch. McRoberts had complimentary things to say about Blossomgame after the camp ended.

“Jaron Blossomgame came in from Clemson and was really good,” said McRoberts. “The sky is the limit from what I saw. You can see how much he wants to learn and improve.”

This summer, Blossomgame attended the Athletes in Action Captains Camp with teammate Donte Grantham in Xenia, Ohio. The camp is designed to instill leadership principles in players throughout the country.

“The experience was great for Donte and myself,” stated Blossomgame. “It opened my eyes to what I need to improve on as a leader.”

As a leader of this year’s team, Blossomgame wants to win more than anything, and apparently his teammates feel the same way. Practices have become more competitive, pickup games have turned into all out dog fights and players are constantly getting up shots after hours in the gym.

“Guys are upset now in practice when their team loses in a pickup game or a team workout, and that’s good for us,” he said.

Blossomgame’s basketball career has been a journey in which he has battled through overwhelming adversity and continued to improve and grow as a result of that adversity. He never counted himself out and never stopped believing in what he could achieve, even when he was lying on that high school gym floor with a broken leg, wondering if he was ever going to play basketball again.

So as he heads into his redshirt junior season, Blossomgame is ready to take his next step and help the Tigers do the same, but he is also thankful for the obstacles he has had to overcome.

“If I could go back and break my leg again, I think I would,” Blossomgame admitted after some thought. “I think everything happens for a reason.”