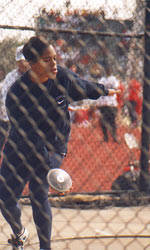 PALO ALTO, CA – Clemson women’s track and field graduate Jamine Moton finished third in the hammer throw in her professional debut at the 2002 USA Track and Field Championships this past weekend. Teammate Sheri Smith also competed at the meet, placing 15th in the triple jump.

Moton, a native of Glassboro, NJ, recorded a mark of 216’0″/65.84m in the hammer throw to place third. Earlier this year, she won the hammer throw at the NCAA Championships with a NCAA, Clemson, ACC and collegiate record mark of 220’6″. Moton completed her career at Clemson with an ACC-record 13 individual conference titles. She also competed in the shot put at the USA Championships, finishing 12th with a mark of 50’10″/15.49m.