The following appears in the May issue of Orange: The Experience.

Born and raised in Anderson, S.C., James Parker always had one big dream, to be a Clemson baseball player. Parker grew up coming to Clemson baseball and football games, making him fall in love with the school more and more with each visit. More significantly, his father, Tim Parker, pitched for the Tigers from 1989-91 and was later a third-round draft pick of the Chicago Cubs. Parker saw his father as a role model and has wanted to play for the Tigers, like him, since he was a little kid. Parker was determined to turn his dream into a reality, and his high school baseball career helped lead him to that point.

Parker attended T.L. Hanna High School in Anderson, S.C. While there, he set the school record for career hits, was all-state as a senior, was four-time all-region and lettered five times. He explained how he was given the opportunity to play some varsity in his eighth-grade year before playing shortstop from his freshman year until his senior year. Parker’s high school years were full of accomplishments, and he credits his high school coach, Daniel Crenshaw, with helping him get to the level he is at today.

“Coach Crenshaw was a great coach, and he really cared about all of us. Having the same coach all five years helped a lot.”

Parker went into more detail, explaining how T.L. Hanna High School consistently boasts great young men going through its baseball program, resulting in good culture in addition to successful seasons. After high school, Parker knew that Clemson was the perfect place for him to take his baseball career to the next level.

Following in his father’s footsteps came easy, as Parker already loved the Clemson campus and spoke highly of the baseball program. He shared that he instantly recognized the high quality of people the coaching staff consists of, pointing out that the coaches care not only about baseball, but also about each individual player as a person.

Any Clemson fan could tell you what he or she loves about the Clemson Family. Parker, a redshirt sophomore shortstop for the Tigers, explained that, to him, “Clemson Family” means trusting everyone within the baseball program. Going into more detail, he explained how everyone has each other’s backs, from players to coaches.

“Everybody really does love everybody. Since I have been here, our culture has gotten better and better every year. It is a big group of guys who understand that we have to put in the work and sacrifice a lot to be able to play. But we all do it together. I trust every one of the guys, and they trust me. We think it should be that way. It is a big family.”

The Clemson Family is even more important to Parker because his family is a part of it. He explained how he has enjoyed getting to play in the same program that his father played in, describing how it as a dream he has always had since he was a kid. The situation has also allowed Parker to have someone to relate to.

“I always think about all the tough stuff we go through, and I know that he went through all the same things. He knows it is tough, and he knows that balancing school and baseball is not easy.”

Parker not only has his father there as someone to relate to, but he also plays the role of a mentor. He further touched on how his dad has always told him how it is, which has made him a better person and a better baseball player. He recollected his father teaching him two big lessons, the first being learning from failure and the second being that he can always bring a good attitude to the field.

Parker has carried that attitude to the Clemson baseball field, where he has made some of his most incredible memories. Parker expressed how his favorite personal memory as a Tiger so far was when he doubled to knock in two runs against the South Carolina Gamecocks on March 1, 2020. His hit put the Tigers in the lead, ensuring the win over the Gamecocks and securing the series.

Parker also revealed another one of his favorite team memories this year was opening day. The Tigers’ 2020 season was cut short on March 12 due to the coronavirus pandemic. With that being said, Parker shed light on just how special opening day at Doug Kingsmore Stadium was for the coaches, players and fans. The day was full of energy and excitement coming from on and off the field.

Since opening day, Parker has served as a leader on the field, where he has gained the nickname “Pastor Parker.” He explained that he was given the title by Kier Meredith, whom he calls “Deacon Meredith.” Both Parker and Meredith received their nicknames because of their dedication to their faith, so they each make sure to get a prayer in before every game.

Parker continues to let his faith and family carry him through his Clemson career, and he continues to consistently deliver for the Tigers at the plate and in the infield. 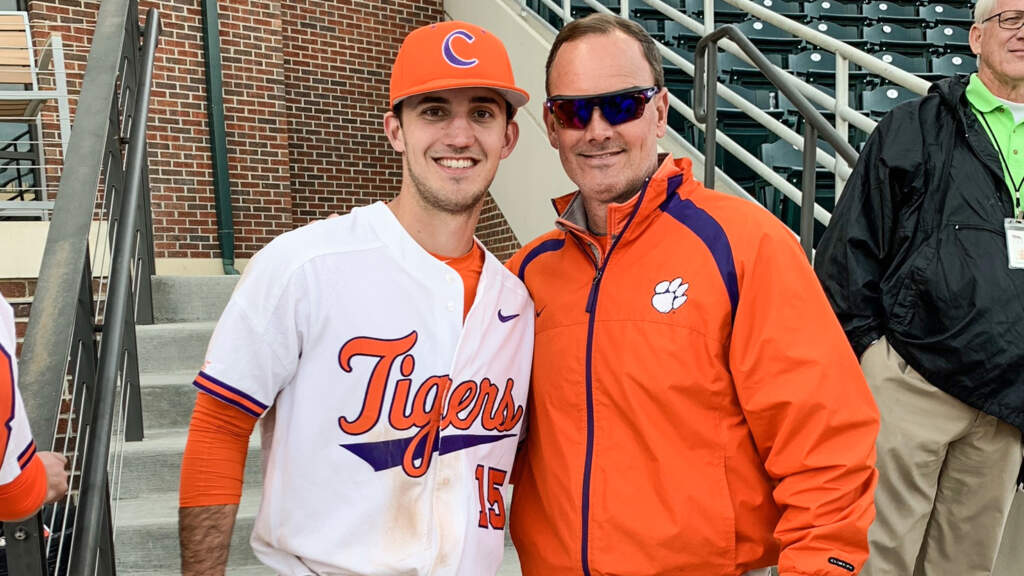