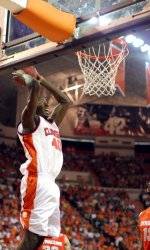 Clemson, SC – Clemson junior James Mays withdrew his name from the NBA Draft on Thursday and will return to school for his final season in 2007-08. Mays, who declared for the draft on April 25, participated in the pre-draft camp last week in Orlando, FL.

“I have decided to return to Clemson for my senior year,” Mays said. “I am glad that I went through this process, but feel coming back will give me a chance to continue to develop as a player, and enhance my draft status for next year.

“It will also allow me to work towards getting a degree, which is important to me and my family. My focus now is to do everything possible to help Clemson win an ACC Championship.”

The 6’9″ Mays was a second-team All-District selection and honorable mention All-ACC performer this past season while helping the Tigers to a 25-11 overall record. He averaged 12.2 points and 6.4 rebounds per game. He also established Clemson single-season records for assists (95) and steals (69) by a frontcourt player.

“Obviously I am pleased to have James Mays returning for his senior year,” said Oliver Purnell, who completed his fourth season as Clemson’s head coach this past season. “I am also pleased that James could gather as much information as he and his family needed to make this intelligent decision regarding his NBA future.

“At this point it is now very important that we all focus on becoming the best team we can.”

With the return of Mays, Clemson will have four starters back from its record-tying 25-win team of 2006-07.