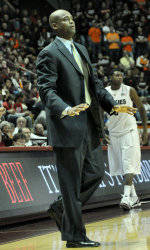 CLEMSON, SC – James Johnson, most recently the associate head coach at Virginia Tech, has been named an assistant coach for the Clemson men’s basketball program. Head Coach Brad Brownell made the announcement Thursday.

“I’ve known James for a long time, we’ve competed against one another several times at multiple schools,” Brownell said. “I’ve been extremely impressed by his work ethic and the fact that he’s worked for some very good coaches. He has good recruiting ties in our breadbasket. He will help us in some Mid-Atlantic areas such as Maryland, Virginia, and Washington, D.C., as well as pick up some of the recruiting Rick (Ray) did for us in the state of Florida.

“He’s a man of high character that has risen through the ranks of the college coaching profession. He will be a very good role model for our players and like all of my assistants, has a career aspiration of being a head coach.”

Johnson was an assistant coach at Virginia Tech from 2007-11 before working the 2011-12 season as associate head coach. During his five seasons on the coaching staff, the Hokies averaged 20 wins and made four postseason appearances. In addition, Virginia Tech went 9-7 or better in the ACC in three of Johnson’s five seasons on staff.

He coached a number of individual standouts during his time at Virginia Tech. Malcolm Delaney was a two-time honorable mention All-American and three-time All-ACC selection from 2007-11. A.D. Vassallo was two-time All-ACC, while Dorenzo Hudson was third-team all-conference in 2010. One of his recruited players, Erick Green, was a second-team All-ACC selection after leading Tech with 15.6 points per game this past season.

Johnson had a positive effect on Virginia Tech’s recruiting efforts in his time in Blacksburg. The Hokies’ 2011 class was ranked No. 12 nationally by ESPNU, No. 13 by Rivals and No. 15 by Scout.

“I’ve known Brad since he was an assistant at UNC Wilmington and I was an assistant at Old Dominion,” Johnson said. “He’s been a very successful head coach every place he’s been. In watching his programs from afar, he’s an excellent coach and a great recruiter. I’m excited to work with him and be a part of his staff.”

Prior to his five-year stint at Virginia Tech, Johnson was an assistant coach for two seasons under Jim Larranaga at George Mason. In 2005-06, he helped the Patriots to a 27-8 final record and berth in the Final Four of the NCAA Tournament. Mason defeated Michigan State, North Carolina and UConn during its “Cinderella” run. In his two years, the Patriots were a combined 45-23 and 24-11 in the Colonial Athletic Association.

Johnson spent the 2003-04 and 2004-05 seasons at Penn State under Ed DeChellis. He recruited Geary Claxton, one of the top 10 scorers and rebounders in Nittany Lion history, to State College. Claxton was a member of the Big Ten All-Freshman Team in 2004-05 and later earned All-Big Ten second- and third-team honors. Claxton scored a game-high 27 points against Clemson in the 2005-06 ACC/Big Ten Challenge.

He coached one season at the College of Charleston, 2002-03, under Tom Herrion. The Cougars went 25-8 overall and won the regular season championship in the Southern Conference. Charleston advanced to the second round of the NIT and won the Great Alaska Shootout with Johnson’s aide. He coached Troy Wheless, SoCon Player-of-the-Year.

Johnson began his coaching career in 1995-96 at Longwood College before spending a season at Hargrave Military Academy. He coached under Jeff Capel, Sr., at Old Dominion from 1997-2000. He helped the Monarchs to a 25-9 overall record and runner-up finish in the CAA in 1998-99. After his stint in Norfolk, he coached at Elon from 2000-02.

“I have experience at all different levels,” Johnson said. “I’ve been in the ACC and the Big Ten. I’ve got recruiting connections across the Eastern seaboard. Hopefully, I can bring a lot of recruiting areas with me to Clemson.”

Johnson hails from Powhatan, VA and was a three-year starter at Ferrum College. He led Ferrum to a pair of conference championships and a berth in the NCAA Division III Tournament. A three-time Defensive Player-of-the-Year selection, he was named one of Ferrum’s top 10 players in history in 2001. In 2009, Johnson was elected into the Ferrum College Athletic Hall of Fame.