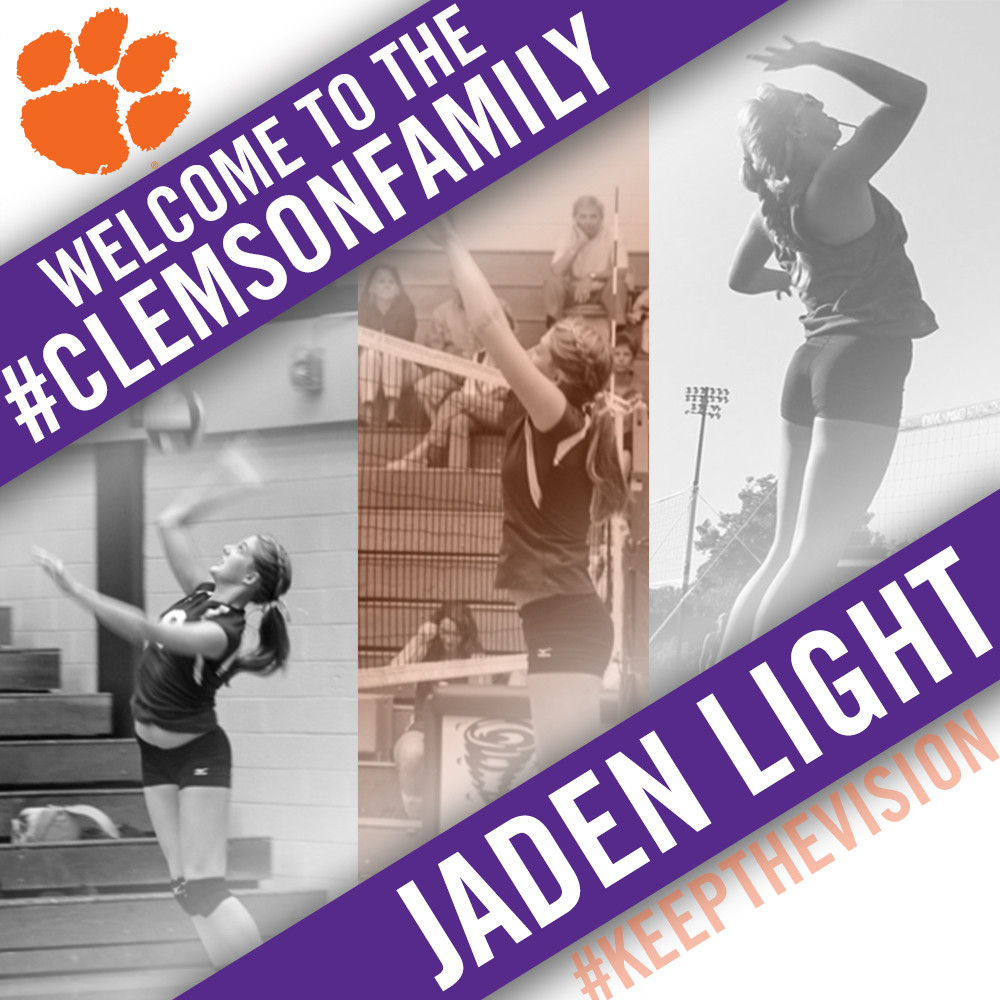 CLEMSON, S.C. – Next season, Jaden Light will join the Clemson volleyball program as the fourth member of the incoming freshman class. The Hickory, North Carolina native is Clemson’s only middle blocker joining the team next year as the Tigers already have announced the additions of Tori Woogk (outside hitter), Maddie Watts (libero) and Emily Curtis (libero). Light will attend Clemson University majoring in engineering.

“Jaden will be a great addition to our program,” said head coach Hugh Hernesman. “One of the first things we noticed about Jaden was her lateral speed and ability to get off the floor quickly. She’s a dynamic athlete with a fast arm that will help us add quality depth at the middle blocker position. On top of her obvious abilities, Jaden is a tremendous student, which should help her grasp our training and systems of play rather quickly.”

Light expressed that Clemson was an instant fit, despite other appealing choices on her list of possible universities. With all but her immediate family residing in Canada, she will be the first of her family to attend a university in the United States.

“A big reason I chose Clemson is that as soon as I arrived on campus I felt at home,” Light said. “When driving into Clemson I get an excitement I didn’t feel when visiting over schools. All of the girls were so nice and welcoming when I met them.”

“Coach Hugh and Coach Steph made me feel welcomed and a part of the family right away. I love the atmosphere they have created and the vision they have for Clemson volleyball. Academics are important to me and volleyball is truly my passion so being able to attend a top ranked academic school while playing volleyball at a competitive level is a dream come true. I can’t wait to see what Clemson holds for me and I couldn’t be more excited to be a Clemson Tiger!”

A product of Hickory High School, Carolina Select Volleyball Club and Carolina Juniors Volleyball Club, Light has has built herself an impressive volleyball resume to compliment her achievements in the classroom.

“Jaden has great ability and potential to be an impactful middle right away,” said Carolina Juniors Volleyball Club coach, Maggie Malone. “She is extremely dynamic and athletic, allowing her to have impressive agility along the net. Jaden’s worth ethic will allow her grow and compete at such a high level. She will be an asset for Clemson Volleyball, and I look to seeing all of her potential.”

As a senior and team captain, Light registered 161 kills and a .436 hitting percentage to go along with her 135 blocks. Hickory High earned its second conference championship in two years. Light led her team to a No. 1 ranking in the NC 3A state playoffs and they went on to finish eighth in all of NC 3A with a final record of 24-2.

“Jaden Light is one of the most gifted, hard-working players to play volleyball at Hickory High School,” said Hickory High School coach Jason Stephens. “Jaden didn’t begin playing volleyball until her 8th grade year and became, what we coaches sometimes call, a ‘gym rat’. She stayed in the gym whether it was playing at Hickory or playing for Carolina Select Volleyball Club or Carolina Juniors with one the goal; to be the best she could be. Her tireless work brought her to a pinnacle as a middle hitter and blocker in our area. With a hitting percentage of over .400 for both her junior and senior years she was difficult to stop offensively and led the conference in blocking three seasons.”

Over the course of her sophomore, junior and senior seasons she generated 493 kills, a .440 hitting percentage and 397 blocks. In that three-year span Hickory High School earned a 67-8 record. Her numbers led to all-conference nods in 2013, 2014 and 2015. She was also the Northwestern 3A/4A Conference Defensive Player of the Year in 2013 and 2014.

“Her eye work is incredible, reading the setter and hitters is a specialty, and her toughness can never be questioned,” Stephens added. “Jaden seemingly doesn’t feel pressure and is a fierce competitor. Her desire to succeed has continually driven her to excel against the toughest competition. She is a jewel that will be missed at Hickory High, but it is only fitting that her love for the game is giving her an opportunity at the next level.  She is the perfect example of hard work and never quitting paying off.”