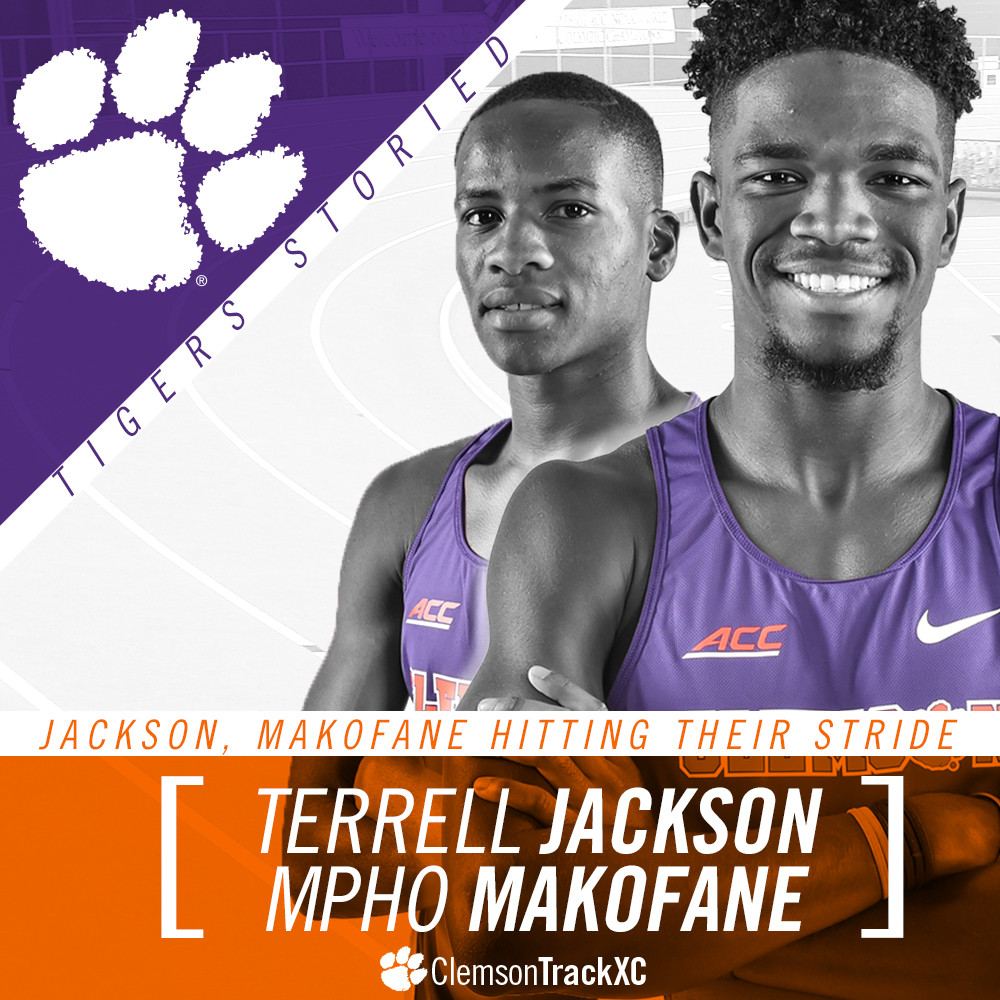 The indoor track and field season is in full swing, and two newcomers to the Clemson men’s middle distance squad are already solidifying themselves as fixtures for the Tigers. Freshman Terrell Jackson and junior Mpho Makofane, a transfer from Monroe College by way of South Africa, are taking aim at becoming staples of Clemson’s talented track team and are off to a great start.

Jackson and Makofane are best suited for the 800 and mile, respectively. Highly skilled and versatile runners, the middle distance racers are valued members of a talented group of athletes who are aiming to make some noise throughout the indoor and outdoor seasons.

A highly decorated prep runner out of Memphis, Tenn., Jackson is looking to translate his state championship in the 800 meters, which he won as a senior in high school, to the collegiate level and is elated to have the opportunity to do so at Clemson.

“I chose Clemson because of Coach (Mark) Elliott,” Jackson said. “I knew he was a good coach, and when I came on my visit, I really liked the team. There was a family atmosphere, so it was an easy choice.”

Elliott, the head coach of the Clemson track and field program, has done an excellent job since taking over in 2013, particularly in the recruiting department, with a lengthy list of accomplishments and glowing reputation winning over top recruits.

“He ran on our level and past our level, so he knows what he’s talking about,” said Jackson. “He’s coached a lot of great athletes before us, and, hopefully, we can become some of his next great athletes.”

In addition to the bevy of star runners that Elliott has helped mold as a coach, another primary reason the veteran coach resonates so much with his athletes is that he was once in their shoes. A distance runner himself, Elliott experienced success on the track at the LSU and beyond, allowing young distance runners, such as Makofane, to identify with him, as well as his tight-knit team.

“When Coach Elliott first came to me, he said that he saw potential in me,” recalled Makofane. “When I came for my visit, I saw that, on the team, they loved and supported one another. I loved this school from the first day, so I signed with the Tigers.”

Like Jackson, Makofane is expected to be a mainstay of the Tigers’ middle distance, and, based upon his seven appearances on the junior college All-America team, he should be able to make his presence felt early on. A former NJCAA Men’s Athlete of the Year for the Atlantic Region, Makofane is a versatile talent, competing in cross country, in addition to middle distance, and he has high expectations for what he and his teammates can accomplish throughout the remainder of the season.

Clemson is off to a solid start to the season, due in part to the revamped Indoor Track & Field Complex. Considered to be one of the fastest indoor tracks in the nation, the facility now features a banked surface that has improved times across the board for the Tigers. When speaking on the new and improved track, Makofane said, “It’s really fun to run here and know that we have a fast track. Even now, by our times in practice, we can tell that it’s fast. We just have to translate those times from practice to the meets.”

So far, so good. Jackson set the Clemson freshman indoor record in the 800, running a time of 1:49.28 at the Rod McCravy Memorial event in Lexington, Ky., two weeks ago. Makofane won the mile run at the Clemson Indoor Invitational, and bested Jackson’s time in the 800 at the same meet (1:48.53) with the nation’s No. 11 time on the season.

Both competitors have lofty goals for the 2017 track slate, including qualifying for nationals and helping Clemson win the ACC title in indoor and outdoor track and field. But, with the excellent support staff leading the way for the Tigers, as well as the close camaraderie of the team, those goals are attainable for the skilled runners.

The Clemson program is rife with stellar talents like Jackson and Makofane, and the two runners are excited about the potential of the team. In fact, they are certain that the Tigers could be among the nation’s best and brightest programs under Elliott’s leadership.

“We could be one of the top programs in the nation,” Jackson proclaimed. “That’s the thing. We’re just now reaching the beginning of our potential.”

The future is bright for the Clemson track team, and rising stars Terrell Jackson and Mpho Makofane are integral reasons why. Their track records indicate versatility, competitiveness and a knack for winning, which serves as the perfect recipe for success as a competitive runner.

Jackson and Makofane have gotten a great jump on the 2017 season and should not be expected to look back as they race for glory. They have hit their stride, literally and figuratively, with their new program and figure to play a big role in the success of the Clemson Tigers.