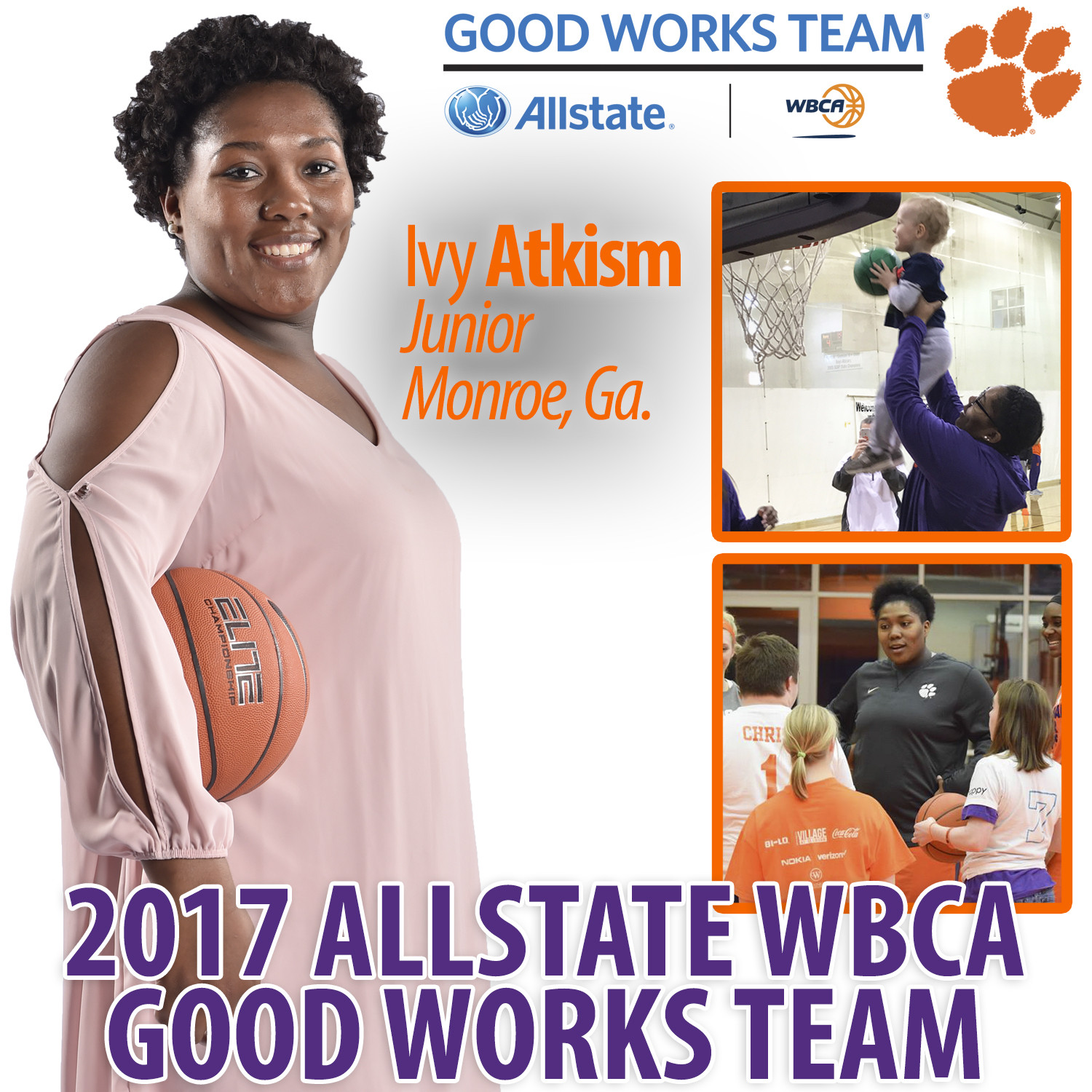 CLEMSON, S.C. – Clemson junior Ivy Atkism has been named to the 2017 Allstate WBCA Good Works Team®. Atkism is one of just 10 women’s basketball players, and one of just five from the Division I ranks, to earn the prestigious accolade, which rewards student-athletes for making a positive impact through community service.

The native of Monroe, Ga. has been involved in many community service initiatives over the past year, and throughout her three-year career as a Tiger. In the fall of 2016, she organized a bone marrow registry drive on the Clemson campus through the Be The Match Registry, encouraging more than 50 people to sign up for the national registry.

She also enjoys visiting local children’s hospitals, schools and after-school programs, as well as retirement homes, and has helped pack backpack snack packs for the United Way/Golden Harvest Food Bank and participated in the Out of the Darkness Campus Walk for understanding and preventing suicide. Each year, she assists with Clemson Basketball’s Tiger Wonderland, an event for underprivileged children in the community, and the Clemson Student-Athlete Advisory Committee’s Be a T.I.G.E.R! Field Day.

Just yesterday, Feb. 7, 2017, Atkism played a significant role in the organization of the Clemson LIFE program’s visit with the women’s basketball program. She planned and led the afternoon practice where the Clemson players taught the Clemson LIFE students some of the basics of their sport.

Atkism was chosen for the Allstate WBCA Good Works Team® from a record 97 nominees, which were announced in Dec. 2016. She is the only Clemson basketball player, male or female, to ever be named to the Allstate Good Works Team. Two Tiger football players have previously received the accolade, most recently Deshaun Watson in 2016.

Atkism has started all 24 games in the post position for the Tigers in 2016-17. She recorded a career-best 12 points and seven rebounds when Clemson faced Virginia Tech on Jan. 8, 2017. She also contributed eight points and five rebounds in the Tigers’ win over Georgia Tech on Jan. 29, 2017.