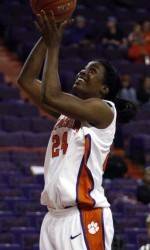 CLEMSON, SC – Clemson head coach Itoro Coleman will be on the sidelines for her first game leading her alma mater when the Lady Tigers (3-1) take on Furman (1-1) at 7:00 p.m. on Tuesday night.

Coleman missed the first four games due to standard doctor-recommended rest following the birth of her third child, Jasmine, on November 5. She does inherit the 3-1 record for the Lady Tigers so far in 2010-11.

The game will be broadcast live on TigerCast at ClemsonTigers.com and livestats will also be available. The first 1,000 fans in attendance will receive an Itoro Coleman head fan.

Coleman and Furman head coach Jackie Carson are each in their first season as head coach of their respective alma maters. Coleman and Carson also attended their schools during the same period and met on the hardwood four times, all Clemson wins.

Clemson Quick Notes * Head Coach Itoro Coleman is on the sidelines for her first game as a head coach; she missed the previous four games after giving birth to her third child on Nov. 5. * Coleman is in her first season as a head coach. The 2000 graduate of Clemson was most recently at Penn State * The Lady Tigers tied a school record with 11 three-pointers made against Kennesaw St. * The Tigers are 30-62 (.484) from long range in 2010-11 and two players have already made more than 10 threes. * Tiger wing player Sthefany Thomas has scored in double figures in each of the first four games, giving her double-figures in eight straight and nine of the last ten games, dating back to last season. * Jasmine Tate has double-figure rebounds in each of her last three games and is averaging 10.0 rebounds per game this season. * Shaniqua Pauldo put up career highs of 26 points and 15 rebounds for her first career double-double against UNCG; She is averaging 15.3 ppg so far in 2010-11, and is 5-7 from three-point range * Kirstyn Wright’s 29 points against Charleston Southern is tied for the most by any ACC player this season and was the most points by any Clemson player since the 2008-09 season (Lele Hardy – 32 – 11/22/08) * Clemson opens with seven of their first eight games at home for only the 2nd time in school history (1982-83) * Bryelle Smith ranks first in the ACC with a 6.8 assists/game average