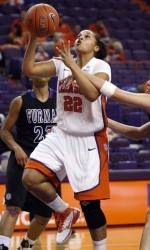 Itoro Coleman Gets First Win on Sidelines for Lady Tigers

CLEMSON, SC – Lady Tiger Basketball coach Itoro Coleman won her first game on the sidelines as Clemson (4-1) held on late for a 62-53 win over Furman (1-2) on Tuesday night. Clemson forced 22 turnovers and held the Paladins to 35.8% shooting, and held their fourth opponent to fewer than 55 points this season.

Coleman had missed the first four games of the season after giving birth to her third child on Nov. 5, but does inherit the 3-1 record prior to her appearance. She has her team off to its best start since 2003-04 at 4-1.

“I thought I was going to be nervous, but I wasn’t,” said Coleman, a 2000 Clemson graduate. “I was just really excited to be out of the house and be with the team. It was exciting. Furman kept it really close for a long time, but we were able to pull it out at the end.”

Senior Sthefany Thomas led all players with 16 points and four steals, and also knocked down her 100th career three-point goal early in the second half. Freshman Kelia Shelton had her best game so far, as she registered a career-high 10 points and nine rebounds, including five on the offensive end.

“We just needed to settle down. We got a lot of good looks early, but we weren’t able to make our layups. We started getting really frustrated, so started telling them to focus on getting it back on defense because the game is still going on and you don’t have time to think about your mistakes.”

The Tigers had 18 offensive rebounds, capitalizing for 21 second chance points, which was the difference in the game. Kirstyn Wright, Jasmine Tate, and Shaniqua Pauldo each had three or more offensive boards on the day.

Tate also registered ten points, all in the first half as Clemson went into halftime with a 27-22 lead. Twenty-four of Clemson’s 27 first-half points came in the paint. The Lady Tigers never trailed after taking a 17-16 lead on a layup by Thomas, but weren’t able to truly pull away, as the Paladins stayed within ten the whole second half.

The win was Clemson’s second in a row, as the Tigers improved to 4-0 at home this season. Clemson is off for Thanksgiving, and will play their next game on Sunday, November 28 at 2:00 pm against South Carolina State.