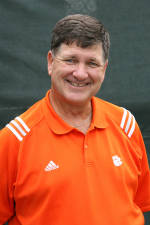 The 2012 class consists of six inductees: Coaches – Chuck Kriese, Paul Scarpa, and Ron Smarr; Players – Patrick Du Pré and David Wheaton; and Contributor – Jon Vegosen. The 2012 honorees will be inducted at the 2012 ITA Men’s Collegiate Hall of Fame Enshrinement Banquet, which will be held on May 23 during the NCAA Division I Men’s and Women’s Tennis Championships at the University of Georgia in Athens, Ga.

In addition to the induction ceremony, there will also be a special tribute to Dan Magill in appreciation of his unique role with the ITA Men’s Collegiate Tennis Hall of Fame over the past 28 years as its founder, Curator, and Chairman of the ITA Hall of Fame Committee.

Chuck Kriese, head coach of Clemson University’s men’s tennis team from 1975 to 2008, was named the ITA Coach of the Year in 1981 and the ACC Coach of the Year six times on his way to becoming the winningest coach in ACC history. He amassed 685 wins and led the Tigers to 10 ACC Championships. He is also the all-time winningest coach in the ACC for league victories with 166.

In addition, Kriese has authored five books.  In 1988, he completed his first book Total Tennis Training, a literary work on coaching techniques and motivatio. Kriese completed his second book, Winning Tennis in 1993. In the spring of 1994, he completed his third book Youth Tennis. His fourth book, Coaching Tennis hit the bookstores in the summer of 1997. In December, 2000 he co-authored a book on the history of Clemson athletics entitled Clemson–Where the Tigers Play.

He is a native of Indianapolis, IN, and is a 1972 graduate of Tennessee Tech. He spent 1973 in New York working for his mentor, Australian Harry Hopman (who was largely responsible for his coaching philosophies and beliefs) at the Port Washington Tennis Academy (NY) before returning to Tech to complete his master’s degree in health and physical education (1975). Kriese has been inducted into the Clemson Athletic Hall of Fame, the South Carolina Tennis Hall of Fame, and the Tennessee Tech Sports Hall of Fame.

“I will be forever grateful to Athletic Directors Bill McLellan and Bobby Robinson for hiring me at such a young age to coach at Clemson University,” said Kriese.

“They gave me the opportunity to work at such a great place for so many years. Clemson University is a wonderful place, and I will always cherish all the relationships, and friends that I formed during my 36 years there. Being named to Halls of Fame are great honors. All the Clemson Tennis Men everywhere are known for their integrity, work ethic, and ability to get the job done no matter how hard the task. The relationships you build with the players through hard work, sweat, and tears are very important to me. These relationships and bonds are what stay with you forever.”

Paul Scarpa, head coach of Furman University’s men’s tennis team for 48 years, ended his career with more wins than any other coach in the history of Division I Men’s Tennis. He finished with an overall record of 853-542-3. Scarpa is also responsible for helping introduce the team format currently used in collegiate tennis.

Patrick Du Pré, a 1976 graduate of Stanford University, played for the Cardinal from 1973-76. He was the NCAA Men’s Singles Finalist in 1976, earning him All- American honors. Du Pré helped Stanford win the NCAA Championship in 1973 and 1974.

David Wheaton, a 1988 graduate of Stanford University, helped the Cardinal win an NCAA Championship in 1988. He went on to have a very successful career in professional tennis, reaching a career-high singles ranking of No. 12 in 1991. Wheaton was also a member of the 1993 United States Davis Cup Team.