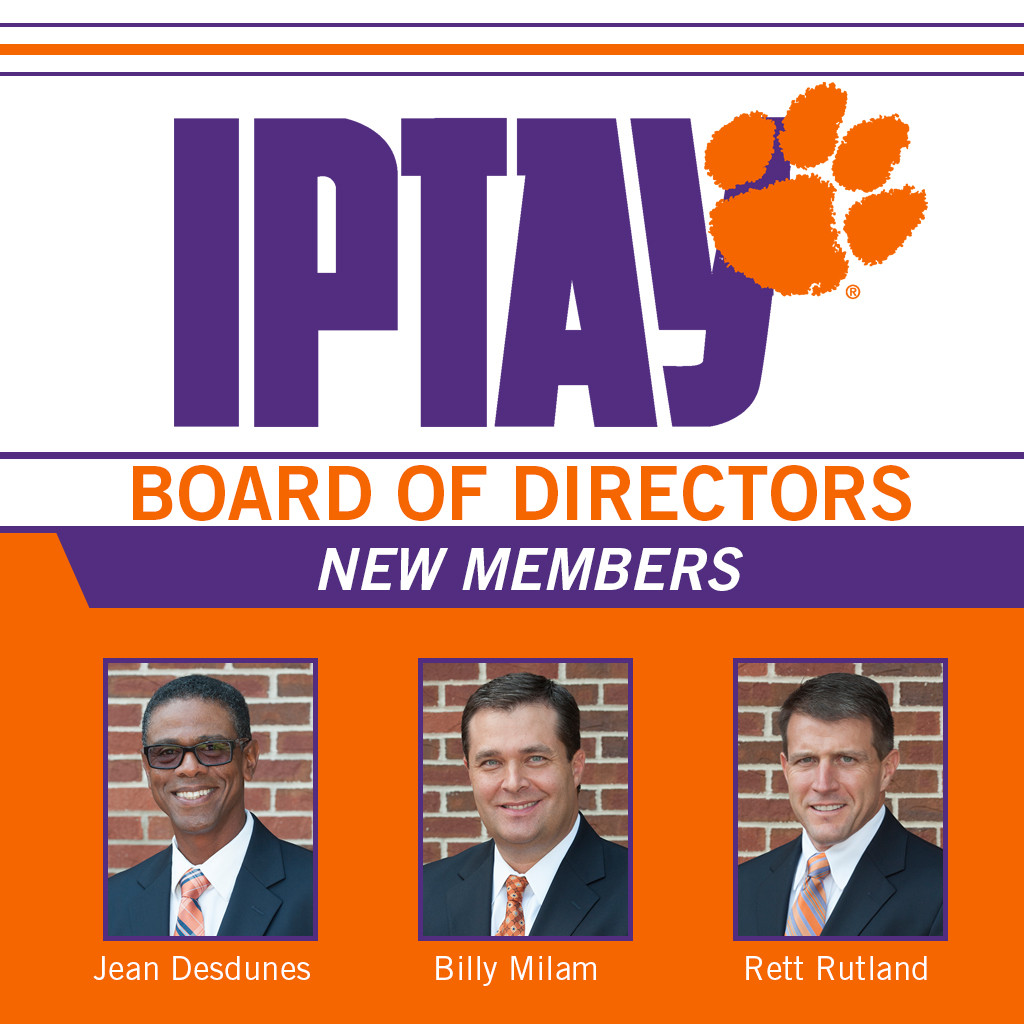 IPTAY Welcomes New Members To The IPTAY Board Of Directors

Desdunes, Milam and Rutland were chosen from a large and diverse pool of candidates through a public nomination process.  This spring, IPTAY had three board positions to be filled in the following geographic districts:

“We are very excited to welcome these three new members to the IPTAY Board of Directors” said IPTAY CEO Davis Babb. “Each of these individuals will bring valuable insight and guidance to the “One IPTAY” enterprise as we continue to move forward in this new era for IPTAY and Clemson Athletics. I look forward to seeing the great work, unique ideas and service that they will provide.

As we introduce these new members, it is important that we thank Kathy Hunter and Ben Leppard for their extraordinary service to the IPTAY Board over the past several years. Hunter and Leppard rolled off the Board on June 30th as their final term came to a close. Both have represented IPTAY and Clemson University with the utmost excellence and we appreciate all that they have done for IPTAY and the Clemson Family.

Bob Riggins, representing District 7 (NC), has been elected to the Executive Committee and now serves as the Treasurer.

A brief biographical background is provided for the new members below.

Jean Desdunes, a former student-athlete, was a standout tennis player for the Clemson Tigers from 1979-1984. On the court he received many accolades including receiving two time All-America honors, four All-ACC nominations, and being named the NCAA Senior Player of the year in his final season. In 2009 he was inducted into the Clemson Athletic Hall of Fame.

Upon graduation from Clemson, Desdunes served as the Senior Director of Diversity for the United States Tennis Association as well as Head Men’s Tennis Coach at Georgia Tech where he was named the ACC Coach of the Year in both 1988 and 1994. He now currently serves as the USTA Lead National Coach.

Desdunes has also been an active member of the tennis committee for Clemson’s Will To Lead Campaign. Jean and his wife Kim have three children: Pierre, Taylor and Whitney.

Billy Milam graduated from Clemson in 1994 with a BS degree. He went on to earn his MBA from the University of South Carolina in 1997. Milam began his career as a Real Estate Analyst with RaceTrac Petroleum. He currently serves as President of the company which has over 700 locations throughout the United States.

Since Milam’s graduation from Clemson in 1994, he has been an IPTAY member for 21 continuous years and served as the Co-President of the Atlanta Clemson Club from 1998-2000. He and his wife Pam have three children: Will, Macie and Madison.

Rett Rutland is a 1996 graduate of Clemson University where he received his BS degree in Mathematics Teaching. He graduated four years later from the United States Sports Academy with his Master’s Degree in Sport Administration.

Prior to becoming a State Farm Agent in Rock Hill, Rutland taught and coached in high school in upstate South Carolina. He also serves on the board for both the Boys and Girls Club of York County and the Young Professionals of York County. His commitment to Clemson has been strong since his graduation, as he has been an IPTAY member for 19 consecutive years and is currently the President of the York County Clemson Club.

Rutland and his wife Lynn have two boys: John and Julian.