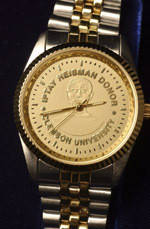 IPTAY Watches To Be Distributed To Heisman Donors

IPTAY received its first shipment of watches recently to be distributed to members of the scholarship fund-raising organization who step up to the Heisman Scholarship contribution level.

The watches, which have a medallion portrait of former Clemson football coach John Heisman on the face, will be sent to donors who have made their Heisman-level pledge ($10,000) to IPTAY by March 15.

Henderson said 31 donors — who will be receiving watches — have stepped up the new Heisman level. The organization has a goal of enlisting 100 Heisman charter members.

“The reason our IPTAY Board of Directors initiated the new Heisman level was the need to better assist student-athletes,” Henderson said. “Our Heisman donors are making a difference in the lives of student-athletes at Clemson University.

“The Heisman watches are a token of our appreciation for their generosity.”

The custom-made watches are silver and gold with a Seiko quartz movement. Each watch is numbered and personalized on the back. The deadline to join IPTAY to receive a football ticket application is March 15, 2005. All pledges must completed by June 15, 2005.

IPTAY officials are asking for donor cooperation as the March 15 priority deadline nears. Donors may renew a membership online by logging on to our website at clemsontigers.com or paying by phone at 864-656-2115. Otherwise, payments may be mailed to IPTAY, P.O. Box 1529, Clemson, S.C. 29633.