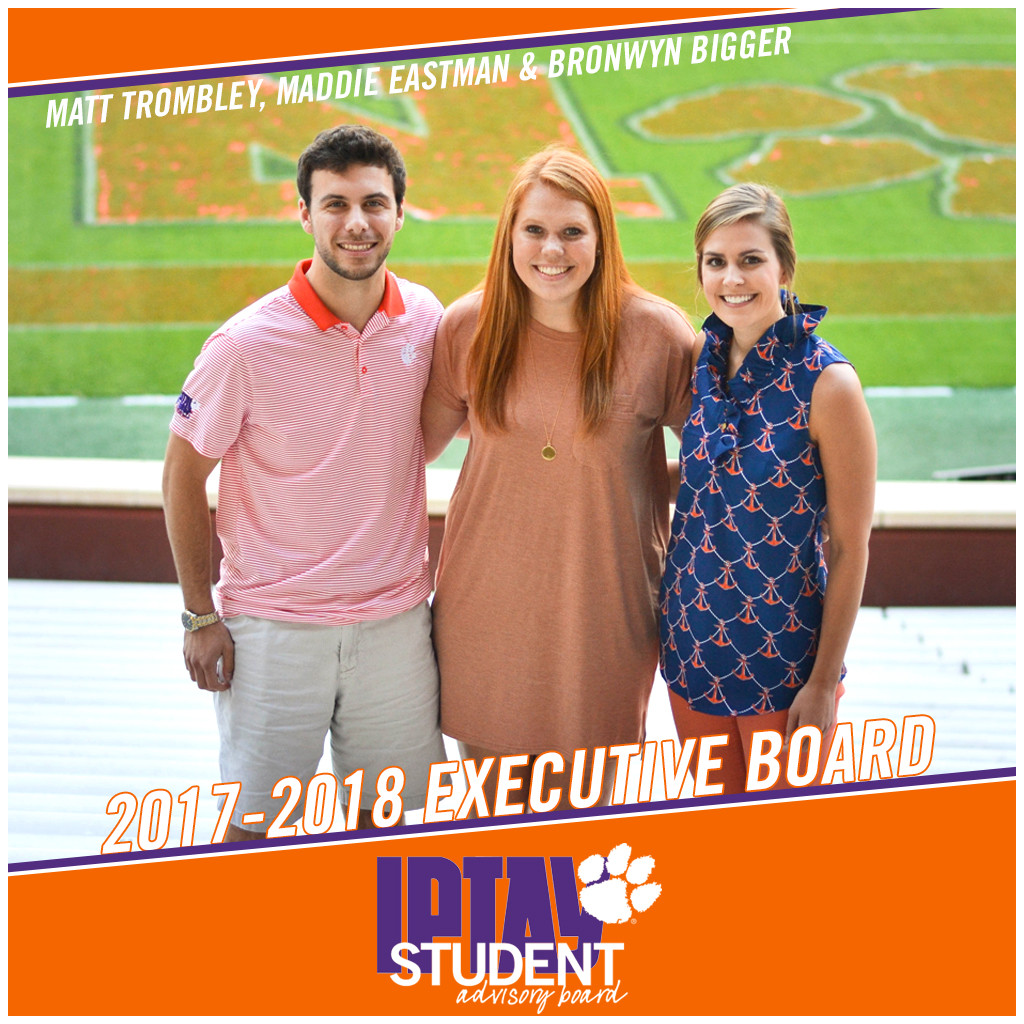 The IPTAY Student Advisory Board, better known as ISAB, is a selected group of current Clemson students who serve as a liaison between the student body and IPTAY. ISAB enables IPTAY to connect with the students on campus to better educate the general student body on the organization’s mission to support student-athletes.

This spring, general elections were held for the executive board positions for ISAB. The newly-elected officials for the upcoming 2017-18 academic year are Bronwyn Bigger (president), Matt Trombley (vice president) and Maddie Eastman (secretary).

Bigger comes to Clemson from North Augusta, S.C., and will serve as the president of ISAB for the 2017-18 academic year. On campus, Bigger is a member of the Council of Exceptional Children, volunteers with ClemsonLIFE, is a member of the Order of Omega honor society and is an active member of her sorority, Delta Zeta, where she served as president in 2016. She is the daughter of Bob and Mary Anne Bigger and has one sister, Sarah, who will attend Clemson as a freshman this fall. Bigger, a special education major, will be a senior when classes begin in the fall.

Trombley is a rising senior from Holly Springs, N.C., and will serve as the IPTAY Student Advisory Board vice president. Trombley, a mathematical sciences major, is also a member of the Student Alumni Association, Recreational Golf Club and Creative Inquiries. He is the son of Colette and Mike Trombley and has one brother, David, who will be a freshman at NC State this fall.

Eastman, a native of Orono, Minn., will fill the role of ISAB secretary. In addition to ISAB, Eastman is very active on campus, where she works with athletic communications as a volleyball statistical editor, is a member of Gamma Phi Beta sorority, is a student teaching assistant for the Vertebrate Biology Lab and has served as a Vickery Hall tutor. A biological sciences major with an emphasis in pre-rehabilitation, Eastman is enrolled in the Calhoun Honors College and is a member of Phi Beta Kappa honor society, Phi Kappa Phi honor society, the Dean’s List and the President’s List. Eastman is a rising senior and is the daughter of Susan and Robert Eastman. She has one sister, Emma, who is a freshman at Nebraska.

IPTAY Student Advisory Board staff advisor Reed Kramer had this to say on the recent elections:

“ISAB is one of my most favorite responsibilities as staff member here at IPTAY. Each spring, I look forward to see who will come forward and be elected to leadership positions within the group. Bronwyn, Matt and Maddie are all talented and motivated young individuals who I have no doubt will be successful this upcoming year. They have great passion for IPTAY and its mission of supporting Clemson student-athletes. I am looking forward to seeing all that will be accomplished in the upcoming year.”

The IPTAY Student Advisory Board works with the IPTAY staff to promote various initiatives on campus, including building the IPTAY Collegiate Club brand, growing the membership base and promoting the Solid Orange message on campus. Go Tigers!