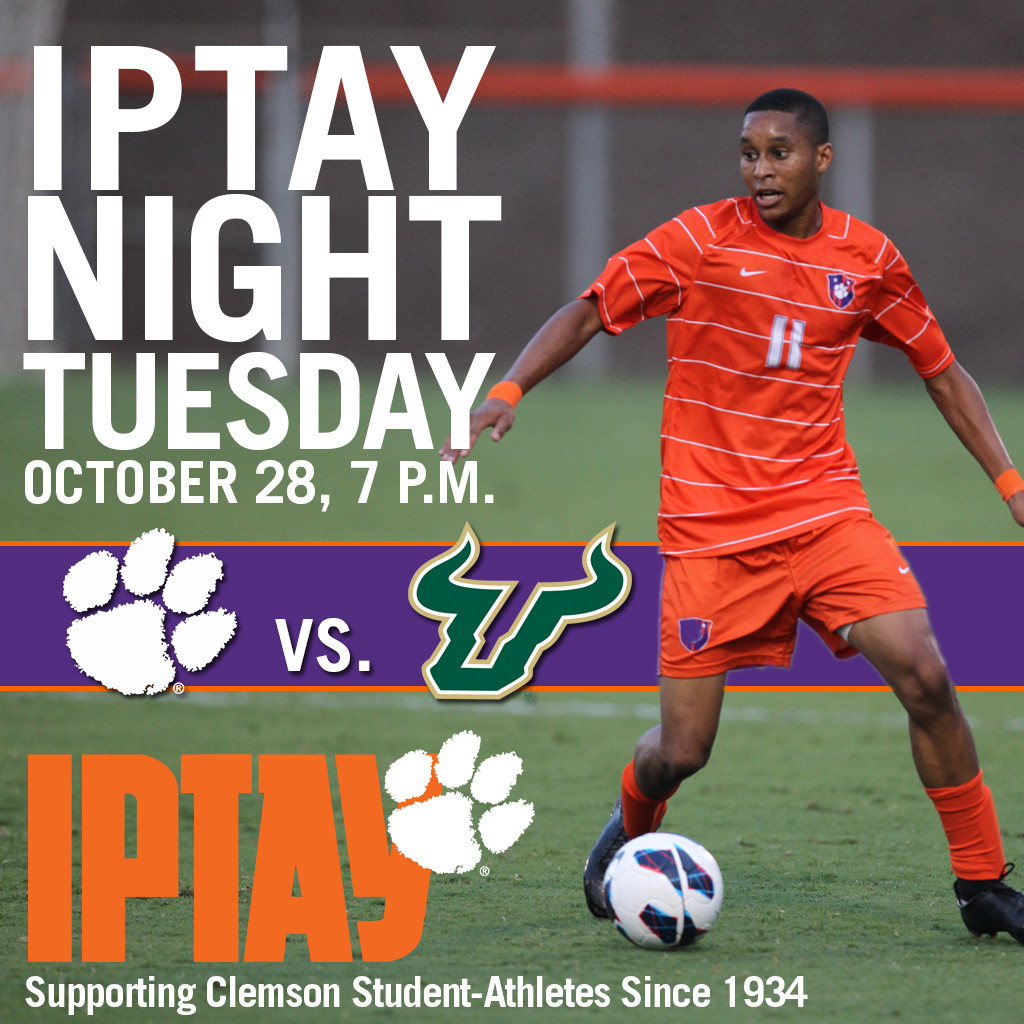 Last Tuesday, heavy rains and storms moved through the area causing the scheduled soccer match to be postponed for a later date. Due to those events, IPTAY Night has been re-scheduled and is now set for Tuesday night October 28th at Historic Riggs Field. The gates will open at 6:00pm and match time is set for 7:00pm as our Tigers will play host to the Bulls of South Florida.

Director of the IPTAY Annual Fund, Travis Furbee, had this to say about IPTAY Night at Men’s Soccer: “We are very excited about IPTAY Night at Men’s Soccer later this month. It is a great opportunity for us to say thank-you to our loyal IPTAY donors as well as educate individuals on IPTAY and its mission. It will be a fun evening for Tiger fans of all ages as Clemson Men’s  Soccer will wrap up regular season non-conference play, taking on the University of South Florida. Even more importantly, at IPTAY we support nearly 500 Clemson student-athletes across 19 varsity programs and it is important that we continue to expand our visibility efforts. This evening, at Historic Riggs Field, is one of several new initiatives this year as IPTAY looks to increase presence across all Clemson athletic events. We hope to see you on Tuesday night October 28th.”

IPTAY Night will include fun for the whole family! IPTAY staff will be set up on the concourse with games and IPTAY giveaways for all Tiger fans who attend. Active Tiger Cub Club /CAT members will receive free admission with presentation of valid Cub/CAT membership card. To purchase tickets in advance, please click HERE.

Priority IPTAY members will have the opportunity to enter a drawing  for a Clemson vs. South Carolina Football Tailgate Package.  The package will include a parking spot for the game on November 29th, a cooler, two Clemson folding chairs, two IPTAY Camelback water bottles, ear buds, ten IPTAY koozies, and a Nike hat and shirt. Please bring your IPTAY 2015 or IPTAY 2014 membership card to enter. Entries will be limited to one per valid priority IPTAY membership.  The winner will be announced at halftime of the soccer game that evening.