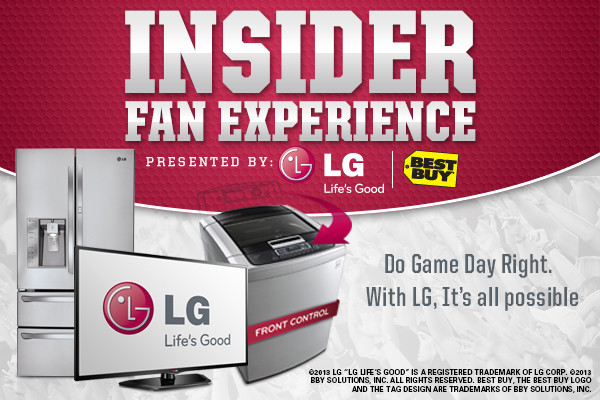 1.  How to Enter: To enter online, go to www.clemsontigers.com/lg to complete and submit the online entry form during the promotional period that begins at 12:00 A.M. (eastern time) on August 26, 2013 and ends 11:59 P.M (eastern time) on October 26, 2013 (“Promotional Period”).  Contest entry limited to one entry per person per email address per day.  Sponsor’s computer is the official time-keeping device for the promotion.

Sponsor will not verify receipt of entries.  Automated entries are prohibited, and any use of such automated devices or programs will cause disqualification.  Sponsor and its advertising and promotion agencies are not responsible for lost, late, illegible, misdirected or stolen entries or transmissions, or problems of any kind whether mechanical, human or electronic.  Promotional entries are the property of Sponsor and will not be returned.  Promotion ends at 11:59 P.M. (Eastern Time) on October 26, 2013.

3.  Prize:   Each week during the Promotional Period, one winner will be selected to receive the following prize:

Odds of winning a prize depend on the number of eligible entries received.  Total value of each prize is approximately $225.00.  Taxes, if any, are the responsibility of the winner.  Prize cannot be transferred, substituted or redeemed for cash by any individual.  The Sponsor reserves the right, in its sole discretion, to substitute any component of a prize for its cash value or a prize of approximately the same retail value.  If eligible winner is deemed a minor in his/ her state of residence, prize will be awarded in the name of a parent or legal guardian subject, however, to all other eligibility requirements which if not met will void entry.

5. Limitation of Liability: By entering this Promotion, all entrants agree to these Official Rules. Winners agree that (except where prohibited) Clemson Tigers Sports Properties, LLC (“Sponsor”) may use winner’s name, picture, likeness and voice for advertising and promotional purposes without further compensation. Sponsor, Best Buy, LG and their promotional and advertising agencies, and all respective officers, directors, employees, representatives and agents shall have no liability and shall be held harmless by winners and guests for any damage, loss or liability to person or property, due in whole or part, directly or indirectly, by reason of the acceptance or use of a prize or participation in this Promotion. Sponsor reserves the right, in its sole discretion, to modify, cancel or suspend part or all of this Promotion should virus, bugs, non-authorized human intervention or other causes beyond the control of Sponsor corrupt or impair the administration, security, fairness or proper play of the Promotion. In such event, Sponsor may award prizes in a random drawing from all eligible entries received up to the date of cancellation or suspension. Sponsor, Best Buy, LG and their promotion and advertising agencies are not responsible for technical, hardware, software or telephone failures of any kind, lost or unavailable network connections, fraud, incomplete, garbled or delayed computer transmissions, whether caused by Sponsor, entrants or by any of the equipment or programming associated with or utilized in the promotion or by any technical or human error which may occur in the processing of submissions which may damage a user’s system or limit a participant’s ability to participate in the promotion. Sponsor may prohibit an entrant from participating in the Promotion or winning a prize if, in its sole discretion, it determines that said entrant is attempting to undermine the legitimate operation of the Promotion by cheating, hacking, deception, or other unfair playing practices (including the use of automated quick entry programs) or intending to annoy, abuse, or threaten any other entrants or Sponsor representatives. Offer void where prohibited and subject to federal, state and local laws.

CAUTION – ANY ATTEMPT BY AN ENTRANT TO DELIBERATELY DAMAGE THE WEBSITE OR UNDERMINE THE LEGITIMATE OPERTION OF THE PROMOTION MAY BE IN VIOLATION OF CRIMINAL AND CIVIL LAWS.  SHOULD SUCH AN ATTEMPT BE MADE, SPONSOR RESERVES THE RIGHT TO SEEK REMEDIES AND DAMAGES (INCLUDING ATTORNEY’S FEES) FROM ANY SUCH ENTRANT TO THE FULLEST EXTENT OF THE LAW, INCLUDING CRIMINAL PROSECUTION.