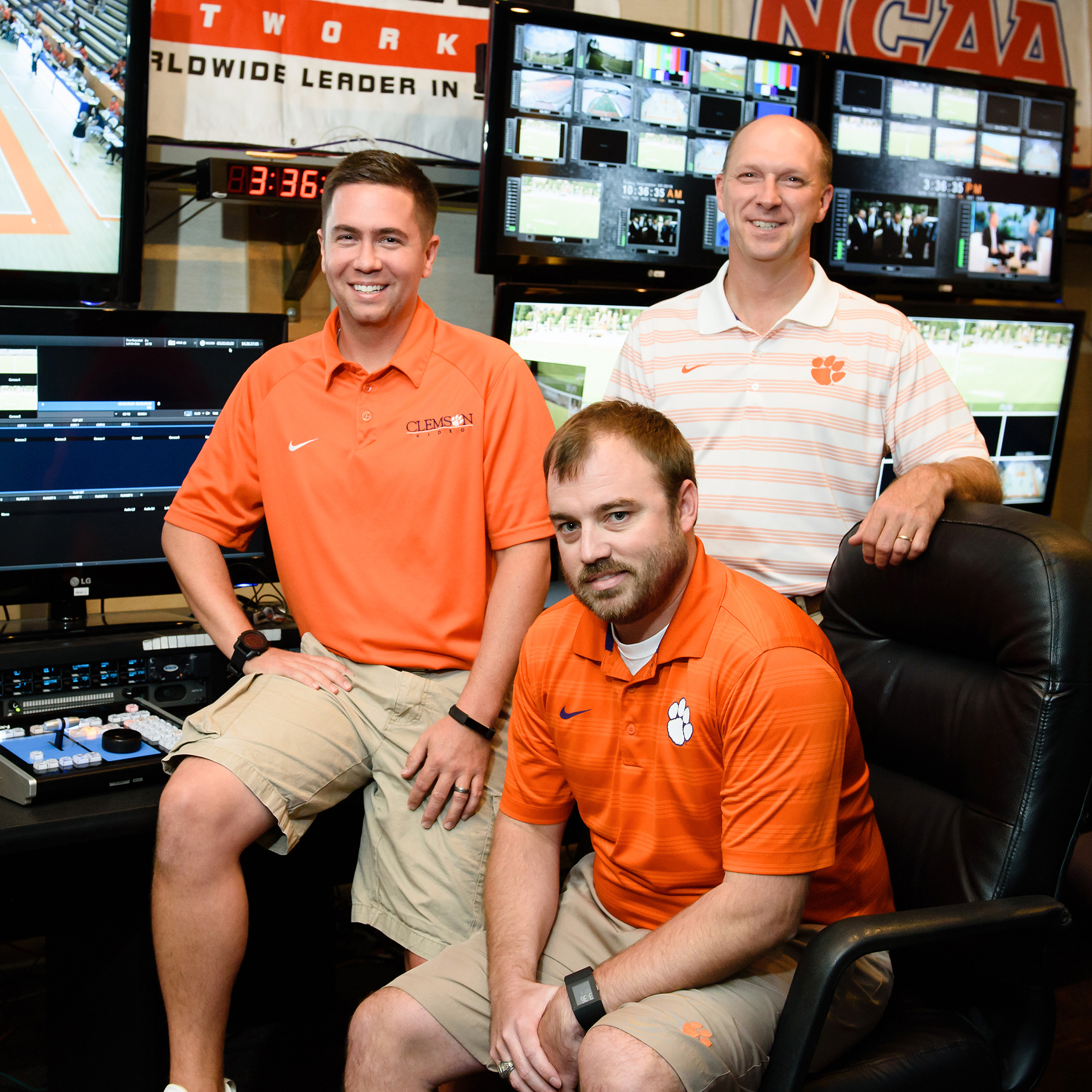 Inside the Control Room

The first videoboard was installed in Memorial Stadium in 1997. Rick Bagby was hired to manage Clemson video services a year later.

A lot has changed in the nearly two decades since.

Bagby, assistant athletic director for video & technology who now leads a staff comprised of two full-time employees and a bevy of student workers, is in charge of more than 120 live broadcasts of Clemson sports.

“When I first got here, all we did was analysis video for the football staff,” said Bagby. “As time passed and technology grew, we added it to the plate. Whether it was webcasting, broadcasting press conferences or creating content to send out to the news media, we did it.

“It’s been around for so long now that it is taken for granted and people don’t really think twice about it. Many people don’t know there is a whole crew behind the scenes.”

Bagby yielded his longtime football video duties to Todd Green in 2014. The move not only allowed him to focus his efforts on Clemson’s live productions, including videoboard control for football and basketball, but also the department’s relationships with the ACC television partners.

His staff includes longtime assistants Matt Glenn and Brett Key, who play pivotal roles in producing content for the videoboards across all Clemson sports, as well as live game coverage through TigerCast and ACC Network Extra.

“Matt produces the videoboard content on football gamedays,” said Bagby, who spends much of his home Saturdays with network television handling technical issues. “Football and both basketball boards are full production out of our control room in Jervey Athletic Center. Men’s and women’s soccer, volleyball and baseball are hybrids between our department and game management.”

Typical videoboard content includes but is not limited to lineup introductions, player graphics, highlight videos, advertisements and statistics. When video services is called on to put together a live production on TigerCast or ACC Network Extra, Bagby’s team broadcasts it from start to finish. This includes the selection of announcers, as well as the creation of an in-game score bug, and various graphics and replays throughout the event.

With the news the ACC would be adding its own network in 2019, it will have a big effect on Bagby’s department.

“Now all our content will go to ESPN and will be shown on ACC Network Extra, which is the same thing as SEC Plus,” he said. “We will broadcast more events each year until the linear television channel, similar to SEC Network, launches in 2019. Each school within the conference will be in charge of creating its own content and producing its own events.”

With that expansion, Clemson’s video services department has outgrown its original space in the middle of Jervey Athletic Center.

“When we added live productions and highlight videos, we were on top of ourselves,” admitted Bagby. “We have been very fortunate to enjoy some of the expansion of the other sports and absorb more space here, and we will continue to do that as basketball moves into Littlejohn Coliseum.”

Bagby and his crew are also responsible for streaming head coach Dabo Swinney’s weekly press conference from the WestZone. He leans heavily on two Clemson graduates, Glenn and Key, each Tuesday during football season.

“Both worked as students and both are Clemson graduates, so they have been with me a long time,” stated Bagby. “Matt and Brett interact with each other all day long, so we basically know what each other needs before we even need it. Because of that, we are very efficient with our time.”

Reliance on students is nothing new. When Bagby was in charge of analysis video for the football coaches, his student assistants did the filming and helped put it together, a practice that continues to this day under the watch of Green and longtime employee Henry Guess.

Students continue to film for athletic video services, but the focus has changed. They are the ones behind the cameras, providing the high-definition action to viewers at home.

Bagby said the evolution of the student workers who have come through his department has been one of the biggest changes in the profession.

“I really enjoy working with students,” he said. “They bring a fresh perspective all day long. In this day and age, everyone has some sort of video background. Fifteen years ago, they did not. We were basically telling them where a power button was on a camera and how to look through a viewfinder. What we are able to teach them from day one now is totally different than it was back then. We are much further down the road.”

Clemson considers itself fortunate to have the resources available to put together high-quality production, both for videoboards and live streaming. At the forefront of it all is Bagby, whose work is recognized and respected by colleagues.

“It’s neat to turn on a television and see how our production level here at Clemson is better than that of some established networks,” said Mike Money, assistant athletic director for marketing & game management. “All the credit in the world goes to Rick and his guys for that.”

The relationship between athletic video services and game management is a critical piece of the equation, according to Money.

“We saw how much the relationship meant with Bon Secours Wellness Arena last basketball season,” he said. “The people there did a great job, but it was a completely different set of folks. It took half a season just to get to know people, whereas here in Clemson we’ve worked with video services together for so long. We know each other’s wants on gameday.”

Gamedays have grown increasingly complex with the advent of new technology and will continue to expand with the announcement of the ACC Network this past summer. With a seasoned veteran like Bagby leading the charge, Clemson athletics appears well-positioned to be one of the conference’s ringleaders for a long time.