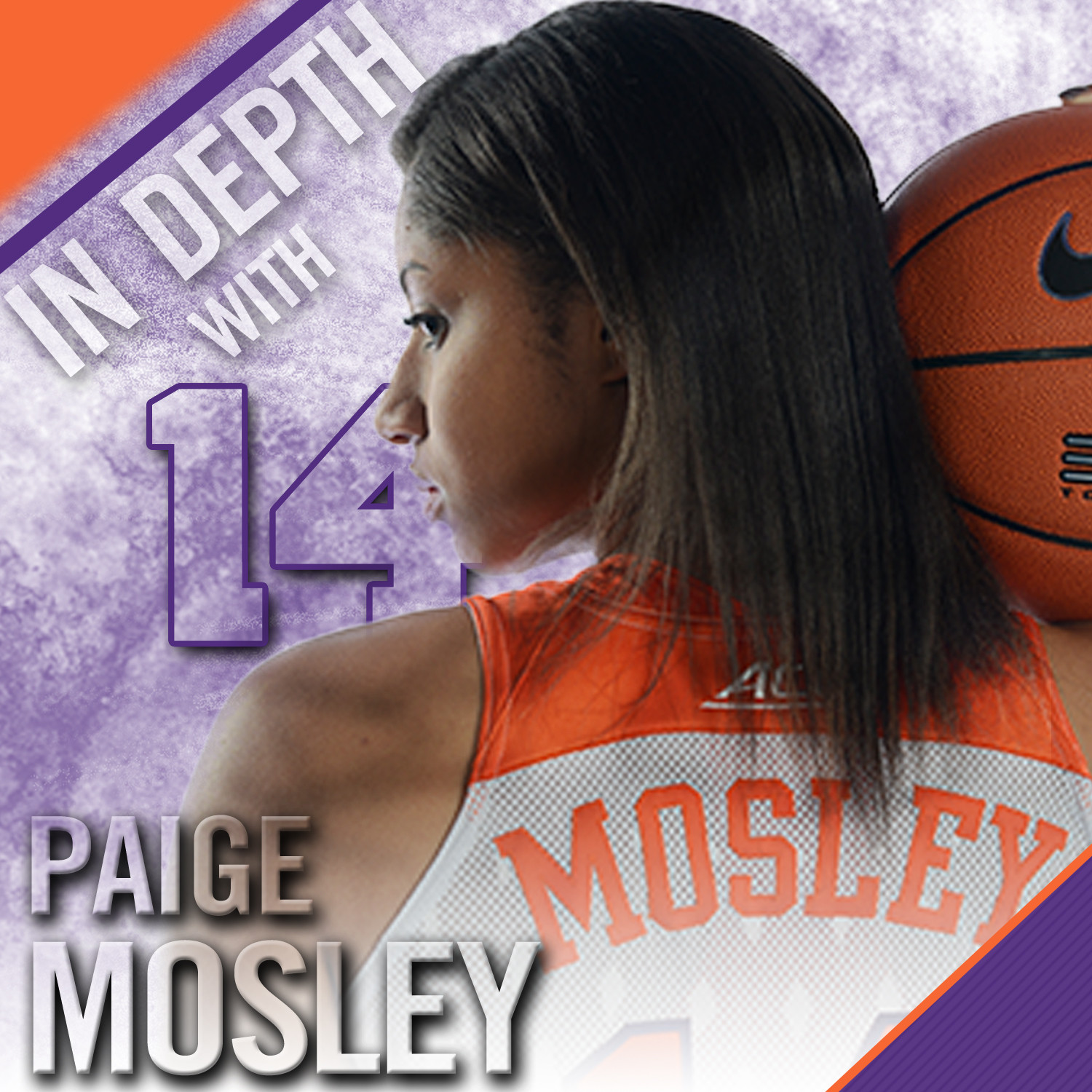 In Depth with Paige Mosley

This year’s Clemson women’s basketball team is one of the youngest in the country, with 13 underclassmen and just one upperclassman. Paige Mosley, a junior forward from Warner Robins, Ga., is the lone upperclassman on the roster. In 2014-15, Mosley appeared in 29 games for the Tigers, starting nine ACC contests. Last season, she played a career-high 30 minutes vs. Wake Forest and scored a career best 15 points vs. Longwood. Mosley’s 45 career games played are the most on this year’s roster.

Mosley is known for her diversity, as she is able to play both the guard and post positions. She is also known for her ability to defend almost any type of opposing player and for her rebounding prowess.

“Mosley is a superb athlete,” Coach Smith said. “She’s a great defender, and can do a lot of different things with the basketball. She can shoot the three off the bounce. She has a lot of pride and is very tough and very tenacious.”

With the Tigers’ season opener vs. Charleston Southern (Nov. 13) just days away, we sat down with Paige Mosley and asked her a few questions.

“I started playing because of my dad. He played when he was younger and was actually pretty good. I picked it up when I was 2 years old, got on a team and fell in love.”

Q: Why did you choose Clemson?

“Coach Smith stayed loyal to me throughout my injuries (ACL tear) in high school. I saw a lot of qualities in her that I see in my mother. I knew I’d fit in so that was why I came to Clemson.”

Q: What has been your favorite basketball memory so far?

“I won a state championship my senior year of high school, which is one of my greatest memories. At Clemson, my greatest basketball memory is winning the first game of the ACC tournament vs. Virginia Tech in 2014. I had my best game of the year and it was really fun.”

Q: What are you looking forward to most about your junior season?

“I’m looking forward to being a leader. I’ve seen a lot of progression in myself since I’ve been here. I’m also excited to play in Jervey Gym. I see a great year ahead of us.”

Q: What are you doing to help lead the team?

“I’ve been putting up shots by myself and with Coach Oliver. I have also made sure to get to know all the girls on the team and have a personal friendship with all of them. They respect me on and off the court.”

Q:  What excites you about playing in Jervey Gym this season?

“I am excited for the crowd. I think it’s going to be a more intimate feel and environment.”

Q: Which Clemson coach has been the most instrumental in your development as a player?

“This year, it’s by far Coach Oliver. But overall, it’s Coach Wilson. I came here as a guard and transitioned to the post and now I play both. He’s taught me things about both positions and has been the most instrumental coach for me.”

Q: What is the Clemson Family?

“It’s home. No matter what you’re going through, there is someone here who cares about you. I know my coaches and teammates care about me and know what’s best for me and that’s what the Clemson Family is.”

Sport other than basketball: Volleyball