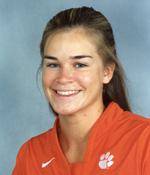 The Tigers will play host to Furman on Wednesday, Sept. 3 in Jervey Gym at 7:00 p.m. Admission is free to all home matches.