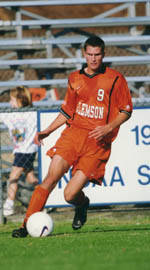 Ian, What kind of future does soccer hold for you? After Clemson, would you rather play pro soccer in Europe or would you play for Major League soccer? Could you give the pros and cons for both? Thanks,Joe Iaricci Framingham, MA

“At this point in the season and my career, I don’t exactly know what kind of future soccer holds. However, I would definitely love attempt to continue my soccer career in the professional ranks.

“Playing in Europe has always been a dream of mine, and probably most every college player. It is very difficult to get into a good situation over in Europe straight from college. Many clubs over there don’t know much about college soccer and have young players who have played with their club for years, ready to step in.

“MLS is a good league, getting better and better. Of course, having the opportunity to play on your home soil is exciting and that’s always a positive. It’s tough to make a living as a young player in MLS, because of the older and more stable talent. I certainly would love to have the opportunity to play in such a new and growing league.” – Ian Fuller

Fuller, Great win against Furman, the boys from ’99 appreciate the redemption. It has been great to watch you for four years and I hope you get a shot at MLS. Do you think we can win that elite eight game finally? We are pulling for you.Andy Heck Austin, TX

“Thank you very much Andy. With the talent, pose, and experience of this years team I definitely think that an elite eight appearance and win may be within reach. We had a couple tough roadblocks to hurdle earlier in the season, which only made us a more experienced side. If we continue to play well throughout the rest of the season, hopefully we will be peaking during tournament time.” – Ian Fuller

Ian, Which ACC venue is your favorite to visit during the season?Ben Austin Danville, VA

“Klöckner Stadium at the University of Virginia is certainly a great venue. They have always had a great crowd with lots of enthusiasm up in Charlottesville. Over the last couple of years we have always had a bit of luck up there, but our luck seemed to have run out this year. I am of course a huge fan of Riggs Field at home.” – Ian Fuller

Ian, Who do you think is the future of Clemson soccer? It seems that a lot of the guys are making a name for themselves, but who will be THE guy to watch?Henry Autlous Indianapolis, IN

“This year’s team is loaded with talent and will be for the next couple of years. With players such as Oguchi Onyewu, Ricky Lewis, Doug Warren, Oskar Bringsved, Kenny Cutler and Fabio Tambosi there certainly is a lot of experience. However, Paul Souders is definitely one player that will be THE guy in the near future. Paul is a player that plays similarly to a past Clemson Tiger by the name of Mark Lisi, who is now with D.C. United. Souders can go at players on the run and also can spray the ball around nicely. He will certainly be the impact player in the future.” – Ian Fuller

Ian, How did you enjoy heading down south for college? Would you advise others to make the long trip to go to school and play in the ACC? Jeffrey Mullis Bender, OR

“My experience here at Clemson can be paralleled with no other experience in my life. It is a unique and wonderful place to spend four years. The amount of growth players experience here, on and off the field, is unbelievable.

“The Atlantic Coast Conference is the premier soccer conference in the nation. Every ACC match is a challenge and only makes players better day in and day out. The coaching staff at Clemson is by far the best I’ve ever been associated with. The professionalism that they possess is fantastic. That is what originally attracted me to Clemson and is definitely one of the positives.” – Ian Fuller

Ian, How frustrating has it been to battle injuries throughout your career? What has it taught you?Wynn Andrews Macon, GA

“I actually have been pretty lucky in reference the severity of my injuries. I’ve had a few knocks here and there that have kept me out of action, but not for an extended amount of time. What I’ve learned most about recovering from an injury is to always concentrate on the little things when coming back. Once you start playing simple and getting little things done, other important aspects of the game will fall into place, such as scoring.” – Ian Fuller

Ian, What has it been like as the sole senior starter with Goodacre out of the line-up? Do you feel a responsibility to lead these young guys?Mark Hewitt Sea Island, GA

“Ross was a huge loss for us in the middle of the season. His recovery has gone excellent and he is set to put himself back into the line-up.

“I really don’t feel too much pressure to lead the team by myself as a senior. The other captain Oskar Bringsved brings a lot of leadership with him as a sophomore as well. Our team this year brought a lot of experiences with them from last year, which always helps. Everything has been flowing very well so far.” – Ian Fuller

Ian, Would you like to see the ACC season go to a schedule like basketball where you would play all conference teams twice?Nicholas Landry College Park, MD

“The idea of playing all of the conference teams twice is really an interesting idea. However, the college season as it is now isn’t quite long enough to add any more matches. If they took away some of our out of conference matches to incorporate this new system, we wouldn’t be able to play some of our favorites, such as Furman and South Carolina. If that were the case, then no, I wouldn’t be in favor of that idea.” – Ian Fuller

Next week’s “Ask The Tigers” format will have a Bowden Bowl flavor to it. Stay tuned to www.clemsontigers.com throughout the weekend to find out more details.