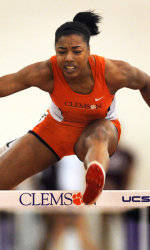 BLACKSBURG, VA – The Clemson track & field program finalized preparations for the NCAA Indoor Championships on Saturday at the Virginia Tech Final Qualifier. Clemson athletes produced four NCAA provisional marks on Saturday, including both Zach Berg and Alex Padgett in the 35-pound weight throw and Spencer Adams and Michaylin Golladay in the hurdles.

The meet served as the last chance for provisional qualifiers to move up the ranks on the NCAA’s descending order performance list in hopes of earning invitations to next week’s NCAA Indoor Championships, held Mar. 12-13 in Fayetteville, AR. Clemson has automatic qualifiers in five events and several more with strong provisional chances of earning at-large spots.

Berg entered last chance weekend hoping to improve on his school record in the men’s weight throw. While he continued his consistent season, the senior did not surpass his personal best in the event. He did place third with a throw of 66’10.5″. Teammate Alex Padgett also qualified provisionally, improving on his second-best mark in school history. He recorded a throw of 65’4.75″ and finished sixth.

Golladay and Adams improved upon their season-best times in the 60 hurdles. In the women’s final, Golladay ran a personal best and finished runner-up with a time of 8.26. Her previous best was 8.31 last weekend at the ACC Championships. At the conclusion of the meet, Golladay’s time ranked in a tie for 15th nationally. In the men’s final, Adams also surpassed his previous best and clocked a winning time of 7.83. Adams moved up one spot on the national descending order list.

In the men’s 60 meter final, Justin Murdock finished fifth, but his best time in the event was 6.72 during the semifinals. The All-ACC sprinter will set his sights on outdoor season, which begins at home in two weeks.

La’Mont Jackson and Murdock took the top two spots. Jackson secured the victory with a season-best time of 21.48.

Jasmine Brunson was fourth in the women’s long jump, producing a high mark of 19’6.75″. Teammate Nakeisha Wineglass (18’10”) was sixth. Josh Fowler finished 10th in the men’s long jump and 12th in the triple jump.

Caroline Kennedy tied for sixth in the women’s pole vault, clearing 12’7.5″. She finished ahead of Amy Morrison, who was eighth after clearing the same height in one more attempt. In the men’s pole vault, Chris Spear cleared 16’1.75″ in only his second meet of the 2010 season.

Padgett was fourth in the shot put Saturday. The red-shirt junior from Rock Hill, SC recorded a top mark of 57’4.75″, which fell just inches shy of his personal best in the event. In the women’s weight throw, freshman Brittney Waller finished eighth (53’2.25″).