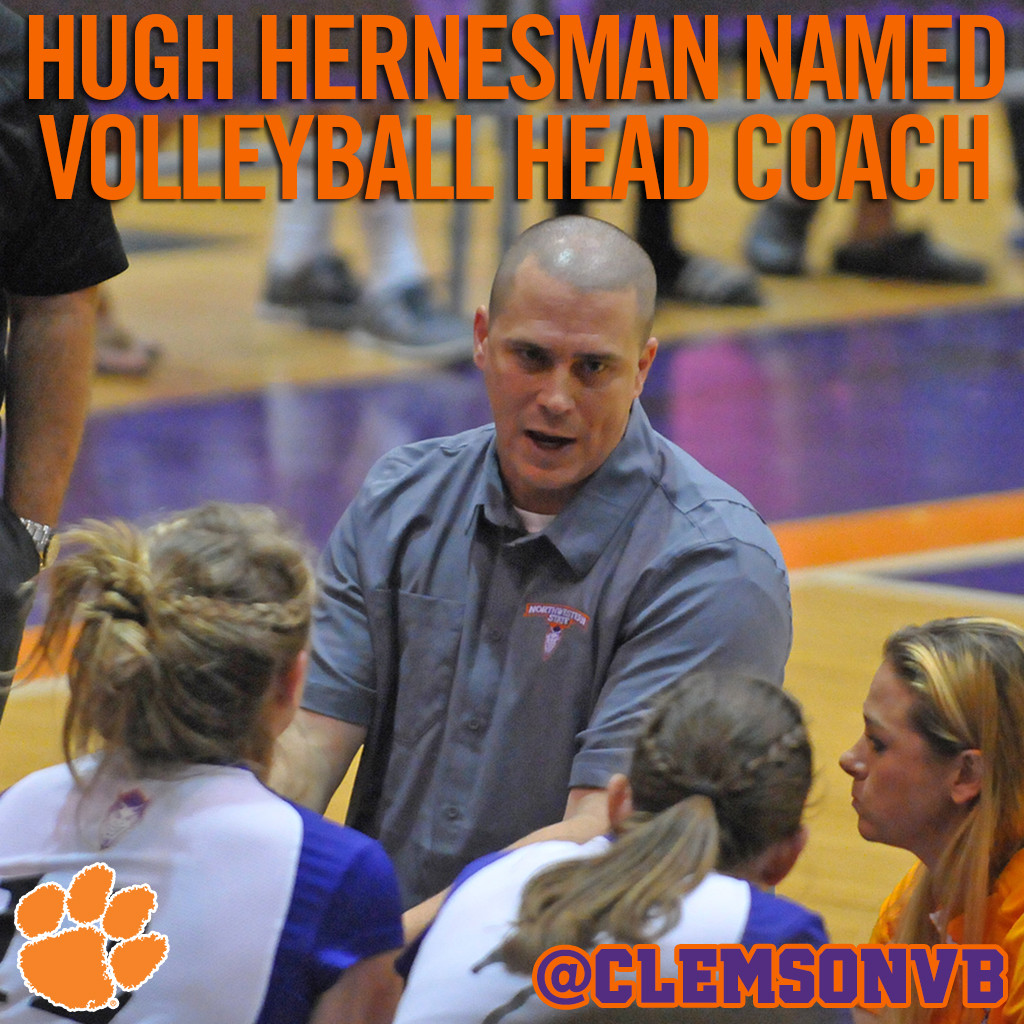 CLEMSON, S.C. – Hugh Hernesman, who won a conference title and advanced to the NCAA Tournament at Northwestern State in 2014, has been hired to be the ninth head coach in Clemson volleyball program history. Director of Athletics Dan Radakovich made the announcement on Thursday. Hernesman has spent the last five seasons at Northwestern State University in Natchitoches, La.

“Hugh has had remarkable success as both a head coach and assistant, and we’re excited to have him lead our volleyball program,” director of athletics Dan Radakovich said. “Hugh has the passion, excitement and care for student-athletes and their development that will make him a great fit in our athletic department and community.”

“I’m thrilled to be a part of the Clemson Family. I would like to thank Dan Radakovich and Natalie Honnen for this wonderful opportunity to lead the volleyball program,” said Hernesman. “I am honored to be selected and assure everyone that our staff will work extremely hard in all phases to build a successful program that Clemson can be proud of. There are some excellent pieces in place and on the way in the 2015 class. We will work hard moving forward in our recruiting to find the right fit for Clemson Volleyball to help bring the program to the next level in a very competitive ACC with extremely talented coaches.

“From the moment I started researching the school and the history of the volleyball program, I could tell what a special place Clemson University is and what potential there is for Clemson Volleyball to be great,” he added. “We will start building a positive program culture from Day One that can provide an excellent experience for our student-athletes.  It’s what we’ve done at every stop along the way, and success has followed behind.”

Prior to Hernesman’s arrival in Natchitoches in January of 2010, the Demon program averaged 10 wins per season, and five per year in Southland Conference play. In 2012 and 2013, his third and fourth years with the program, the Demons recorded back-to-back 20-win seasons. In 2013, Hernesman guided the team to the most overall wins (21), most conference wins (15) and highest final RPI (98) in the program’s 32 years of NCAA Division 1 history.

In 2014, a season in which the Demons lost two of their top players to injury, Northwestern State won the Southland Conference tournament for the first time in school history, defeating both the first and second-seeded teams en route to the title. The Demons received the conference’s automatic invite to the NCAA Tournament where they fell to Texas, the number-two seed overall.

Before becoming the Demons’ head coach, Hernesman spent three seasons (2007-09) at Ball State as the first assistant coach and recruiting coordinator. His recruits, especially the 2010 class from which four of the five players went on to be named to the All-MAC team, were a significant factor in the Cardinal program’s improvements, which included a MAC title in 2010 and an NCAA Tournament bid in 2011.

Hernesman served as the head coach at Hardin-Simmons University in Abilene, Texas from 2004-07. Hernesman, who inherited a program that had recorded one winning season in the previous 15 before his arrival, led the Cowgirls to their first American Southwest Conference tournament appearance in 2005, just his second season with the program. In 2006, the Cowgirls won their first-ever ASC Tournament title and qualified for the Division III NCAA Tournament for the first time in school history.

Hernesman’s team won the 2002 Division III National Championship during his first coaching job, a nine-year stint as an assistant coach at Wisconsin-Whitewater from 1995-2004. The Warhawks appeared in nine consecutive NCAA Tournaments in his nine seasons, which included six Elite Eights and four Final Fours, and were capped off by the national title in 2002. The team also won six WIAC titles during his tenure with the program.

Hugh and his wife Stephanie have two children, son Austin and daughter Emma.

READ WHAT HERNESMAN’S FORMER PLAYERS HAD TO SAY:

Megan Boyd (Hardin-Simmons, ‘07)“Having Hugh as my college coach was one of the best experiences of my life. He was able to create a very unique culture within our team, and everyone completely bought in to the program, because of him. He motivates his athletes every day and made everyone to want to win for him. Now that I am a coach myself, I find it even more impressive that he was able to build the kind of culture and program he did with my team.

“Another one of his biggest strengths is in recruiting. When you meet Hugh, you really like him; he’s not at all fake. He’s easy to trust, and runs his program with integrity and character.”

Taylor Deering (Northwestern State, ‘11)“Hugh completely turned the NSU program around. As soon as he arrived, he started working with us on being a team. I learned more from him in one year as my coach than in my three previous years as a Division I student-athlete. The knowledge, skills and fierce competitive drive he brings is hard to explain, but it’s real.”

Mackenzie Neely (Northwestern State, Senior, Graduates in May 2015)“I could not have dreamed of or asked for a better experience at NSU with Hugh as my coach. He’s a calm, laid back coach, but is also very engaged during matches. He’s good about working with players to help them get better instead of just yelling at them. There was a real family feel among our team and a lot of trust between the players and coaches.”