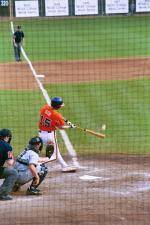 Scared but confident of his protectors, the teenager sat in the bulletproof room of his Kuwaiti home, hopeful and fearful as he peered out the window on the watch for Iraqi tanks.

As it had throughout his nomadic younger years, baseball once again provided comfort for the 14-year-old Ryan Hub as he sat with his mother and older sister, awaiting a phone call from his father updating the situation.

Saddam Hussein, who just three years earlier had beckoned the United States into the Gulf War after invading Kuwait, was once again issuing a threat and stationing troops along the border.

Hub and his family were told to have their bags at the ready – they were allowed one each – and the teenager had packed his baseball glove and a ball as he sat in his Ken Griffey Jr. jersey. It was Oct. 8, 1994. Hub, Clemson’s junior outfielder, calls it the scariest moment of his life, but also a turning point.

“We sat in that secured room for about five or six hours and it changed my life,” Hub said. “I sat there, with this one bag with my glove and ball, waiting on that phone call from my dad that the Marines may have to come in and get us out.

“It really opened my eyes. I had such a large respect for the Marines sitting out in their unit that were going to risk their lives to come into this country and get me out if I needed to be evacuated. From then on, I wanted to be involved with what’s going on.”

Hub, the son of an Air Force pilot, was born in England, and has lived in South Korea in addition to his two-year stint in Kuwait. He began the season having batted 8-for-43 his entire career, including 0-for-8 last year in just 10 games off the bench. But Hub has hit .324 in 17 starts with three homers and 16 RBIs this season.

With war in Iraq raging, Hub has become a teacher and locker room correspondent for his teammates, providing a unique and experienced perspective.

“He’s basically our CNN, he keeps us informed,” senior pitcher Paul Harrelson said. “He’s really intelligent, well-read and has a lot of insight as far as the war. “He has great stories and can speak on a wide variety of topics you don’t usually find with most teammates. When something like (the war) happens, everybody on the team will go to Ryan and get his take on things.”

To say Hub’s perspective is unique is an understatement. He’s cruised down the Nile River, traveled all over Europe, Japan, the Mediterranean and Africa. As a 14-year-old, already he had “minor encounters with both al-Qaida and the Iraqi regime.” He’s spent days on high alert never leaving his home without his dog-tags (for identification in case of attack) or diplomatic passport if an immediate evacuation was called for.

Hub can’t express his love for the United States enough, but has formed a special bond with friends from his life in the Middle East that he wishes he could properly convey to Americans.

“I try and educate my peers about the Middle East as much as I can because my experience there was the most influential of my life. I was able to experience the culture and I loved it. I completely adapted myself to it and it is something I would never trade.

“In Kuwait, if an American made an attempt to be involved with their culture, they would return the favor two-fold. I was able to learn the language and submerse myself into their culture, do the things they do, and it was just phenomenal.”

It was part of American culture that helped a kid who moved 11 times in his first 16 years to integrate himself into any situation. Sports became an instant unifier, whether it was soccer as a kindergartner in South Korea or track and volleyball in Kuwait.

“That’s the wonderful thing about sports, it’s universal and there’s no language barrier,” his father Michael Hub said. “Sports has been a life-long endeavor for him and something that’s drawn him into communities very quickly.”

Baseball in particular, while not a big draw in the Middle East, was a security blanket for Hub, who says no matter where he moved, the sport was something he could count on. While in Kuwait, Hub received his introduction to Clemson baseball, staying up to 4 a.m. and seeing Kris Benson pitch in the College World Series. He knew nothing of the Tigers then except “wondering who the team with the white cleats was.” There was no high school baseball in Kuwait, but club teams where Americans and Kuwaitis played on fields entirely of dirt from December to February when it wasn’t too hot to play.

Now, he shares an identity with a different group, a people in turmoil far away from the U.S. Hub wishes he could go even in these troubled times. “Everyone on the team knows the Middle East is very important to me,” Hub said. “I love the Arab community and I would do anything to go back there right now.”

Special thanks to Spartanburg-Herald Journal for permission to reproduce this article.