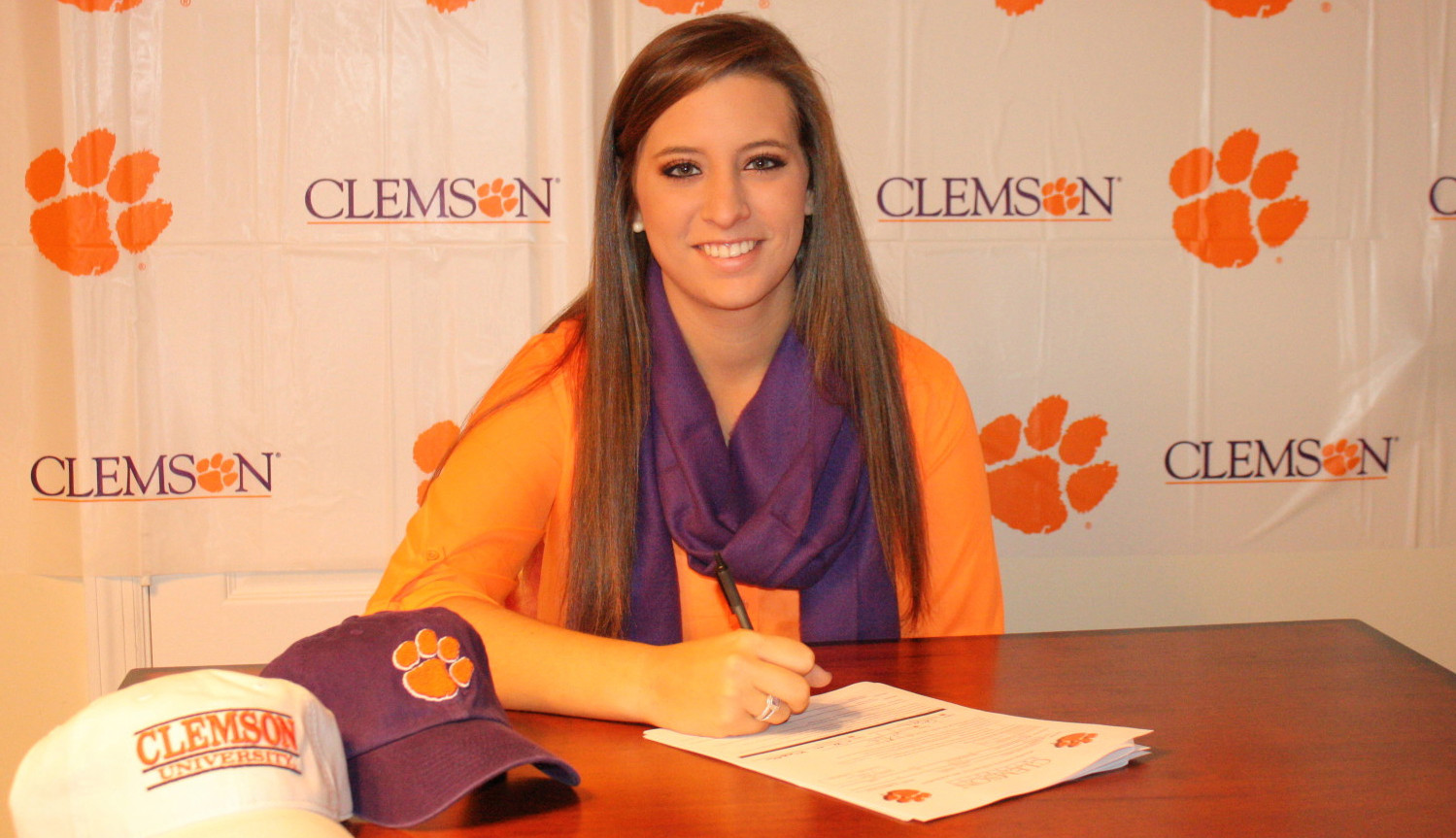 CLEMSON, SC – Clemson Women’s Golf Coach J.T. Horton has announced the signing of four student-athletes for the 2013-14 academic year.  All four women, two from South Carolina and two from Georgia, are ranked among the top 50 golfers in the nation according to the latest Golfweek American Junior Rankings.

The four newcomers will join Lauren Salazar and Taylor Ramsey, who are already enrolled at Clemson.  Horton’s team will begin play in the fall of 2013.

“This is a wonderful day for Clemson athletics and our golf program as a whole,” said Horton.  “By adding these four young ladies along with Taylor and Lauren, we are putting together a very strong team to represent this great University in the women’s college golf world. I can’t wait to have everyone here and begin competing next fall. We are lucky these ladies have chosen Clemson and we are looking forward to starting a new tradition and history for years to come.”

Ramsey is the sister of current Clemson women’s golfer Taylor Ramsey.  Ashlan has been named a first-team AJGA All-American each of the last two years, one of just eight women nationally who can make that claim.  This past summer she finished second at the United States Public Links Championships and played in the Junior Solheim Cup for the United States team.  She is ranked sixth in the nation by Golfweek and third by Polo Golf Ranking for the 2013 recruiting class.

Shanahan is ranked 40th in the nation for the 2013 class according to Golfweek.  She had four top 10 finishes in 2012, including a sixth-place at the Carolinas/Georgia Junior Championship, eighth at CSGA Girls Junior Championship, seventh at SCGA Beth Daniel Junior Azalea and ninth place at AJGA Girls Championship. She was a three-time region champion as well.

Hoang is ranked 45th by Golfweek among juniors nationally.  She had a strong 2012 season on the AJGA circuit with five top 15 finishes.  She also had five top 10s in 2011, including a victory at the E-Z-Go Vaughan Taylor Championship in July.  She won four tournaments in 2011, including the Beth Daniel Junior Azalea.

Overview:Nationally ranked 45th for the class of 2013 according to Golfweek’s Junior rankings…played for American team in the 2012 Can-Am Matches…had strong 2012 season on the AJGA circuit, she had five top 15 finishes, including a fourth-place at the E-Z-Go Vaughn Taylor Championship in July…it was her second straight top four finish at that event…finished 15th at the Scott Robertson Memorial…placed 10th in AJGA Juniors at Savannah Quarters…had five top-10 finishes in 2011, including win at E-Z-Go Vaughn Taylor Championship…won four tournaments in 2011, the Beth Daniel Junior Azalea, the AJGA Junior at Jones Creek,  the Carolinas Junior PGA and the Ballantyne Junior Open…it marked the second time in three years she won the Carolinas Junior PGA…also third at the AJGA Junior at Chateau Elan…runner-up at the Golf Pride Junior Classic, so she had six top three finishes in 2011 overall…won the SJGT Forest Hills Junior Classic and the UGA Auto Trader.com Invitational in 2010…won SJGT Forest Hills Junior Classic in 2009 along with the Carolinas Junior PGA…she was the youngest to win that event (age 14) in 36 years…SJGT Player of the Year in 2009 and 2010…2009 Augusta Area Player of the Year…won the Goshen Plantation Junior Classic on the Hurricane Junior Tour in 2008…Golfweek Player of the Week in 2011…plays on  the North Augusta High Boys Golf team…daughter of Dave and Tracy Hoang…born May 1, 1995.

Coach J.T. Horton on Jessica Hoang:“Jessica is one of the future stars of this game. It would be truly hard to find anyone who works harder on their game/fitness than Jessica does. A true competitor, she will do what it takes to be successful and win championships. Her best golf is yet to come even though she has some very impressive accomplishments thus far. She has easily been one of the best players in South Carolina and has extensive tournament experience at a high level. Jessica is a very good player, and no doubt will play an integral role to us being competitive immediately.

Overview:First-team AJGA All-American in 2011 and 2012, she was honorable mention in 2010…one of eight women’s golfers nationally to be first-team All-American in each of the last two years…nationally ranked sixth by Golfweek and seventh by Polo Golf…number-one junior in the state of Georgia…ranked fifth by National Junior Golf Scoreboard for the class of 2013…ranked 35th in the country and 56th in the World by GolfWeek’s Amateurgolf.com ranking…reached the round of 32 at 2012 US Women’s Amateur and the match play portion of the 2011 US Public Links…in 2012 played 16 national and amateur tournaments and had three wins, two second-places and five other top 10s…won the Sea Pines Junior Heritage, the Georgia Junior PGA Championship and the  Joe Cheves Junior Invitational…reached championship match of the US Women’s Amateur Public Links Championship in the summer of 2012 where she lost 4 &2 to Kyung Kim…also reached final 16 of US Junior Girls Championship in 2011…finished third in two AJGA Invitational events in 2011…named to the 2011 PING Junior Solheim Cup U.S. Team…also played in 2011 Wyndham Cup and the 2010 Cannon Cup…GSGA Girls Player of he Year in 2012…Macon Telegraph’s All-Middle Georgia Golfer of the Year…named GISA Class 3A All-State, and all-region in 2011 and 2012…recorded 25 top 10 finishes at AJGA events between 2009 and 2012…raises money for the Hunter Renfroe Fund…her sister, Taylor is a freshman at Clemson and is red-shirting this year, so both will be in same class in terms of eligibility starting in the fall of 2013…daughter of Al and Carla Ramsey…born December 3, 1995.

Coach J.T. Horton on Ashlan Ramsey:“We are very excited about Ashlan and what she brings to the program. She is absolutely one of the top juniors in the country and has had an amazing past year or so. Ashlan is loaded with major tournament experience and has as much determination and desire to be the best as any young player in the game today. She is a player with a lot of confidence and a high golf IQ. Ashlan is someone you can expect to make an immediate impact nationally in women’s college golf and the perfect person to represent your university.”

Head Coach J.T. Horton on Sloan Shanahan:“Sloan is the epitome of what we expect as a Clemson student-athlete. She has so many accomplishments in academics, golf, and community service and has a passion to succeed at the highest level in everything she does. On the course, she is a fierce competitor whose game has improved as much as anyone in the last year. We have seen her game go to another level and you can bet she will have a great college career. She is one of the top juniors from the state of Georgia and we are very lucky she decided to make Clemson her home.”

Head Coach J.T. Horton on McKenzie Talbert:“McKenzie was the first player to commit to play for our inaugural women’s golf program. She is the ideal fit for Clemson and the most passionate, competitive person I have had the opportunity to recruit.  McKenzie’s golf resume in South Carolina is unmatched and her desire to win championships is what will make a great leader for this team. You can expect McKenzie to be someone that we lean on a lot on this team as she is a wonderful player who will have a tremendous college career.”