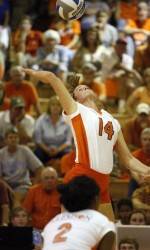 CLEMSON, S.C. – The Clemson Volleyball team picked up its second sweep in as many nights, taking out the Maryland Terrapins (10-10, 2-5 ACC) to improve to 13-5 overall and 4-3 in the conference. The win was the 350th at Clemson for head coach Jolene Jordan Hoover, and the Tigers fourth in five matches overall. Clemson was able to take advantage of 11 Terrapin service errors en route to a 25-17, 25-20, 25-17 win.

The Tigers we solid defensively, allowing Maryland to hit only .133 with 8.0 blocks. Didem Ege had her second straight three-set match with 20 or more digs, as she had 28 Friday against Boston College and 21 against the Eagles. Lia Proctor added four, to go along with nine kills, seven digs, and two service aces.

Natalie Patzin led the Tigers with 10 kills, as the Tigers spent most of the evening playing relatively mistake-free and forcing Maryland into 23 attack errors in 120 attempts, including 11 in the final set. By comparison, the Tigers registered only 12 in 98 attacks, and had only three service errors, while not allowing an ace. Maryland’s Sam Rosario entered as one of the best in the nation wit the serve, but she had five errors on Saturday.

Maddi Lee led the Terrapins offensively with a match-high 15 kills in 36 attempts. She was error-free through the first two sets with 12 kills, but had five in the deciding third set.

Trailing 5-4 in the first set, the Tigers used a 14-6 run to take a 19-11 lead, as Kelsey Murphy found five different Tigers for klls during the set. She finished with 13 assists in the first set. Sandra Adeleye put the first set away with a kill for the 25-17 first-set win.

The Tigers took a 4-0 lead in the second set and traded points for the rest of the set, never allowing Maryland to get closer than four points, but never distancing themselves by more than six points (16-10). Clemson hit .407 for the set with 13 kills and only two errors in 27 attacks. Maryland had 17 kill sin the set, including eight from Lee, but were unable to close the four-point cushion.

The third set was ugly offensively, with Clemson hitting.062 and Maryland hitting .021. Clemson only had seven kills in the set, but it was enough to stave off the Terps, who hit into six Tiger blocks and made 11 attack errors and four service errors. Didem Ege seven digs were enough to keep Clemson in the match, closing on an 8-3 run and winning on a service error by Rosario.

The Tigers will play at Virginia on Friday at 7:00 pm before heading to Blacksburg to take on Virginia Tech at 4:00 pm on Saturday. Clemson’s next home series will be Oct. 23-24, when Clemson plays host to Duke and Wake Forest. The Wake Forest match will be Clemson’s Dig Pink effort.