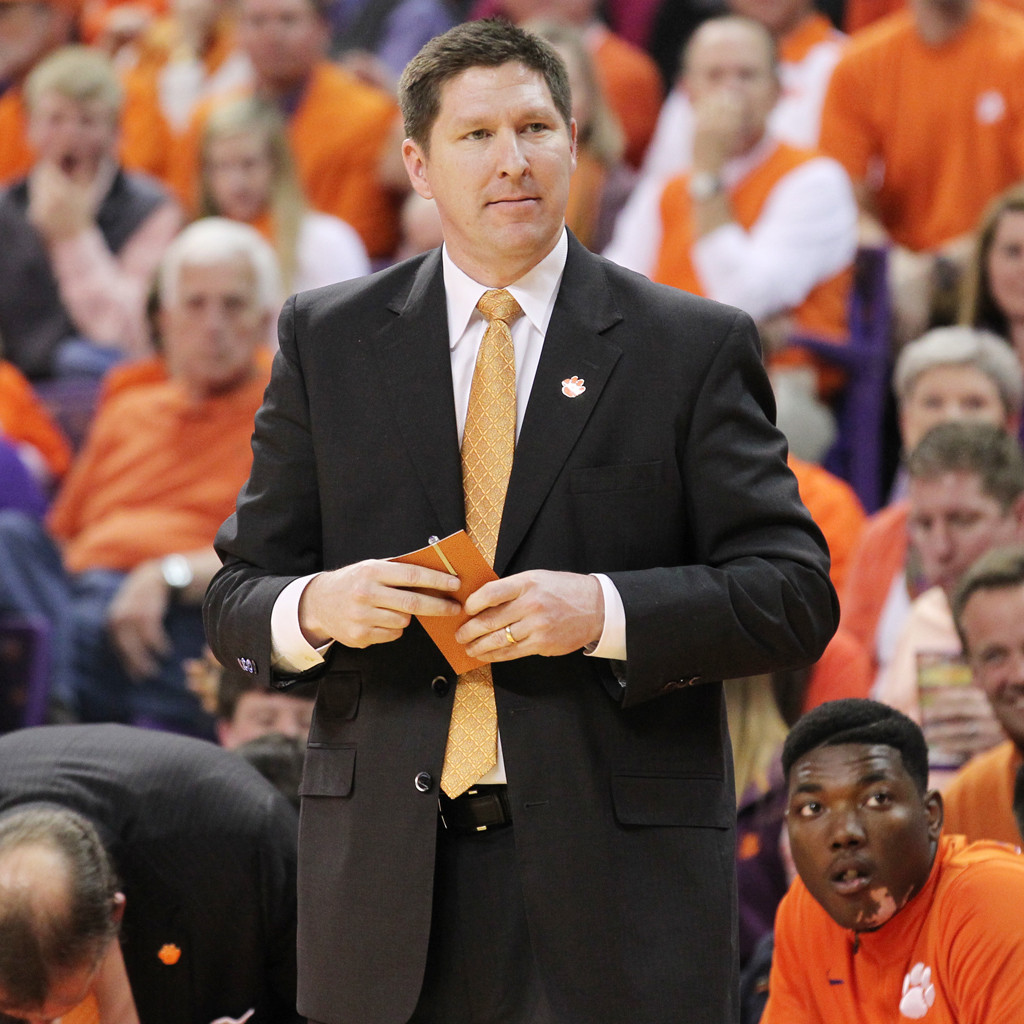 Members of the media met with the men’s basketball coaching staff Wednesday at the annual preseason golf outing at The Cliffs at Keowee Springs. Brad Brownell and his assistants gave their outlook on the 2014-15 season. Read what they had to say:

“I think last year was an outstanding year for our program, with 23 wins, 10 ACC wins and a final four run in the NIT. With the enthusiasm that those games had at the end of the year, I think fans really rallied around our team and appreciated a group of guys that came together and played extremely well and extremely hard. We had a young man that had a breakout season; he was first-team All-ACC and was drafted into the NBA to achieve a lifelong dream. Then we had another young man in our program achieve a dream in Earl Grant becoming a head coach at the College of Charleston. I think you saw success in just about every aspect of our program. I’m excited about the recruits that we’ve brought in and the way recruiting has gone. I’m certainly blessed to have been given a contract extension, which is a vote of confidence from our administration, so they like what is going on in our program. I said a couple of years ago that even though the wins weren’t coming, there were a lot of positive aspects in our program and it was good to see that come to fruition with both success on and off the court.”

On what K.J. McDaniels being drafted meant to the program…

“Well, it means a lot. Certainly K.J. wasn’t a guy that most people thought would make the NBA when he first came here. He was an unheralded recruit, and we think we played a big role in helping him get to that level. Our development and belief in him, along with his work ethic, allowed him to get to that level faster than we all believed. That certainly gives you credibility out on the recruiting trail when those kinds of things happen within your program. He had an incredible season. Sometimes I think the media and fans don’t truly understand the impact that he had on our team. He was one of the five best players in the ACC last year, a little bit out of nowhere. He is certainly a good player, though I would much rather be talking about him as a player on our team rather than Philadelphia. But having said that, I’m really happy for him and excited for him to do well at the next level.”

“We’re going to miss those eight to 10 points each game that K.J. (McDaniels) gave us that almost nobody in the country could replace — whether it was him dunking a ball, blocking a shot or just creating momentum in general. But I think guys see what he did for our team, and other players will step up. Damarcus [Harrison] has to play well like he did at the end of last year, Rod [Hall] has to be steady and maybe add a couple more points and then [Austin] Ajukwa and Donte [Grantham] really have to step up. At the four, [Jaron] Blossomgame has had a good summer after a little leg injury at the end of the NIT run. He has been in the gym the most and has been shooting the ball really well. When our four-man can step out, shoot the ball and spread the court, that is when we’re really good. Then Landry (Nnoko) in the middle will hopefully demand more attention, which he is ready for. He has been working really hard this summer. He had a meniscus injury in May, so we took it a little slow but then he was on fire during rehab and he looks great, ready to go.”

How does Nnoko take that next step?

“It started this summer and then with team workouts after September 15. He is going to be a main focal point, so we looked at how he played and then we’ll go from there. He’s going to get some opportunities, and I think he’s ready for it. It was unbelievable to se how his confidence grew last season; you could see it in his eyes. By the end of the year he was getting some double teams, so we have to be smart and can’t force it. Jaron has done a nice job feeding the ball to him in early-season workouts, which will help spread the court. A big emphasis with Landry is being more physical and getting seals, which he has been working on with Sidy (Djitte). We have to be a good shooting team and our guys are improving on that, you can see it. We have five or six guys that are making threes in practice, so that will help our team as well.”

What is it going to take to replace the production of K.J. McDaniels?

“We won’t do it with one person, it will be by committee, but (you can’t coach) some of the things he did defensively rotating the other team or getting a big rebound. But in terms of replacing what he did on the stat sheet, it will be by committee. Rod (Hall), Damarcus (Harrison), (Austin) Ajukwa, Donte Grantham — all of those guys are going to have to pick it up a bit.”

What have you seen from Damarcus Harrison this offseason?

“He’s been more consistent which is what we’ve been trying to do. His biggest thing was if he missed a couple of shots he would change his mechanics. So our challenge was just getting him to trust it and believe in himself. He needs to be a little bit more like Rod. Rod is an even-keel guy. He doesn’t go up, he doesn’t go down. You would like him to get a little more revved up every now and then, but on the other hand you want Damarcus to be a little more steady.”

What about a guy like Grantham? What have you seen out of him?

“We knew he was pretty good, but just to see how he handles the ball, sees the floor and plays, he has a very high basketball IQ. To be 6-foot-8, pass and handle the way he does, he is going to play early. He has a great feel for the game right now and at that size it is kind of rare to find guys like that. So we feel good about him playing early.”

What is your comfort level going into your third year with the program?

“Obviously I’m a lot more comfortable with Coach Brownell, just understanding his system and what he wants. He has empowered me. He allowed me to take ownership of the wings last year and let me do what I wanted to do with those guys. I felt good last year, but this summer has been really good.”

“During the interview process, Coach Brownell discussed what is expected. I think my role on this team is to be that young and energetic guy. I need to have a very good relationship with our players. Obviously recruiting will be a very big part of my job. We have to bring in high-character guys that are also highly talented players. We play in the best conference in the nation, so we obviously have to recruit at a high level. I take a lot of pride in recruiting, it’s something that I want to be known for. But I also take a lot of pride in just being a basketball coach. I love coaching on the floor, individual improvement through getting our guys better. I’m out recruiting and trying to build relationships with players and get them to come to Clemson, but I’m also trying to build relationships with our current players. When you come in at this time of the year it’s important for the players to know that I care about them and that I am going to be a guy that they can trust and build a great relationship with.”

How much have been able to talk with the current players?

“I made it a point as soon as I got the job to communicate with those guys and I told them how excited I was to get the opportunity to coach them. I watched Clemson from afar last year when I was coaching at UAB, and I just had a ton of respect for the type of guys that are here. We were in the Charleston Classic with them last season, so I got to see them play a couple of times. The character of the kids is unbelievable. I texted each of the kids once I officially got the job and every single one texted me back telling me how excited they were to work with me and that meant a lot to me.”