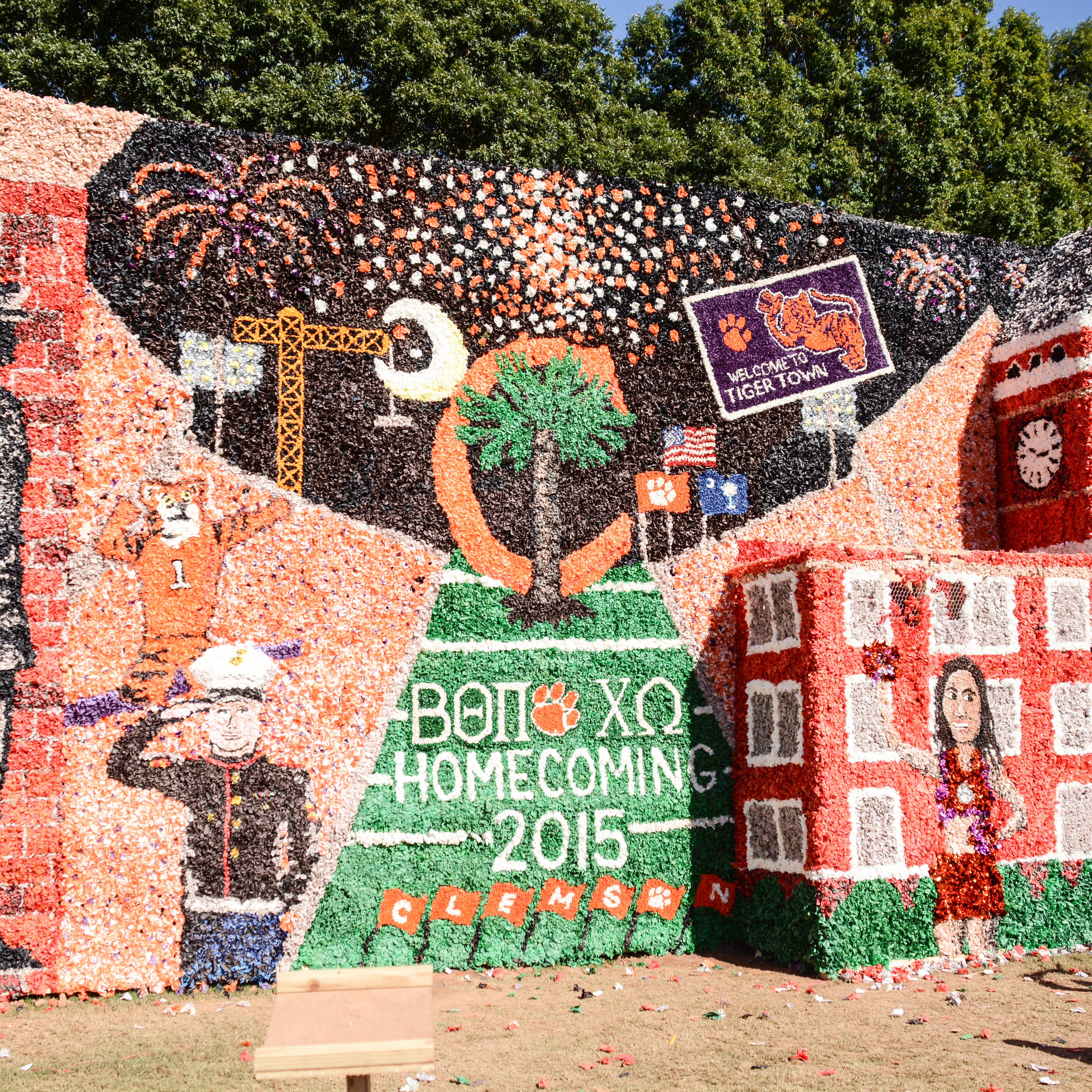 Homecoming at Clemson is a special time.

The traditions surrounding homecoming, and the spirit in the air are simply unmatched by other schools. Homecoming at Clemson allows for reacquainting with others. It entails alumni functions, reunions, and most of all bringing the Clemson family together, back home. It’s very unique with the displays and floats built on Bowman Field and the extravaganza of Tigerama.

It all started back in 1922, when Clemson met Centre College in football. The homecoming day surrounding the football game was a day set aside to welcome back alumni to the campus for a special weekend.   Although many alumni move away after graduation, for many their thoughts and love for Clemson never leaves them.  There is a special place in their hearts for Clemson.

It’s no wonder that homecoming is a special time and the alumni feel as though they have never left campus with the traditions that are carried on year after year.  The bond that Clemson creates between the school, the students and the surrounding area is definitely a magical one.

The 60th Anniversary of Tigerama

The Friday night before Homecoming, an event that is a combination of a pep rally, fireworks display, and skit presentations comprise Tigerama.  This year’s Tigerama will mark the 60th anniversary of the event.

Tigerama began in 1956 and was the brain-child of the late Joe Sherman.  Sherman, a 1934 graduate of Clemson, started the Clemson News Bureau, the Clemson Communications Center, and the Sports Information Department.

The first Tigerama was planned for the amphitheater in the middle of campus, but this never came off because of heavy rains that afternoon and night.  Instead, it was moved to the ballroom of the Clemson House, with 200 people in attendance.

A few days before Football Homecoming, there are architectural wonders on Bowman Field. Each year the Clemson fraternities, sororities, and other groups play one-upmanship with the construction of Homecoming floats and displays.  There is a central theme surrounding the Tigers and their opponent on Homecoming Saturdays, and the innovative displays and floats that take months of planning.  It’s unlike anything anywhere else in the country.

It’s not known exactly when the first displays were started, but before fraternities came to campus, Clemson cadets would make signs and small displays encouraging the Tigers to victory and this started in the late 1920s and early 1930s.

Clemson and N.C. State met for the first time in football in 1899, in Rock Hill, SC. The Tigers dominated the game. As a matter of fact, the game was shortened due to the fact that many of the Wolfpack players were getting injured and they didn’t have enough players to finish the game. The Tigers won the game 24-0.

Clemson won a home game with N.C. State in 1902, 11-5. The 1903 and the 1906 games were played in Columbia, SC as part of the South Carolina State Fair in mid October. After a home and home series, the two teams played the 1928 and 1929 games in Florence, SC as part of the Pee Dee Fair. Around 5,000 fans were in attendance at each game. The contest was part of the Clemson-N.C. State Day festivities at the fair.  Fireworks were also shot at halftime of the game.    The press box was filled to capacity, as this was a big game in the Southern Conference race.

In 1939-44 Clemson played six games in Charlotte, NC at Memorial Stadium. People also know this stadium as where the Shrine Bowl used to be played and it is also the current home to the Major League Lacrosse team, the Charlotte Hounds.

It was a festive time for Clemson and N.C. State in Charlotte. The Clemson cadets were in attendance and they had a parade down the streets of Charlotte where the Clemson cadets and the Senior Platoon, Clemson’s precision drill team performed.  This afforded Clemson an opportunity to win friends and publicity in the Queen City.