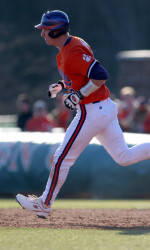 Doug Hogan hit a three-run homer in the 10th inning to propel #16 Clemson to a 5-2 victory over Virginia Tech in front of 285 fans at English Field on Sunday afternoon. The Tigers completed the sweep, as all three wins were by exactly three runs. Clemson also improved to 23-9 overall, including 8-4 in ACC play, and upped its winning streak over the Hokies to eight games dating back to 2005. Virginia Tech dropped to 16-17 overall, 4-11 in the ACC.

Tiger reliever Alan Farina (2-0) earned the win, as he allowed no hits, no runs, and two walks with seven strikeouts in 4.1 innings pitched. Stephen Clyne picked up his second save of the season as well.

Like game-two of the series, Clemson jumped out to a 1-0 lead in the first inning thanks to a solo home run. This time it was by Marquez Smith to left-center, his sixth homer of the season and second of the series.

The Hokies came right back and tied the score in the bottom of the first. Nate Parks led off with a line-drive single to right-center, advanced to second on Warren Schaeffer’s sacrifice bunt, and stole third. Sean O’Brien struck out for out #2, but Redd lined a 3-2 pitch to left-center for a run-scoring single.

After the Tigers were a combined 0-for-5 with runners in scoring position in the second and third innings, Virginia Tech took the lead in the bottom of the third. Matt Foley led off with a double to center and Parks followed with a walk. Schaeffer moved the runners up on his second sacrifice bunt of the game. O’Brien’s groundout to second plated Foley, giving the Hokies a 2-1 lead.

The Tigers had a golden opportunity to take the lead in the seventh inning, but Redd only allowed Clemson to tie the score. Pinch-hitter Alex Lee led off with a bunt single and went to second on D.J. Mitchell’s walk. Foley tried to throw behind Lee at second, but the throw was wild, allowing both runners to move up. Pinch-hitter Addison Johnson popped up to shortstop for out #1 and the Hokies elected to intentionally walk Brad Chalk to load the bases. After fouling off several two-strike pitches, Taylor Harbin lofted a sacrifice fly to center to score Lee. The Tigers could not come up with a two-out hit to take the lead, as Smith grounded out to end the inning.

In the top of the 10th inning, Smith led off with an infield single to shortstop. After squaring around and bunting unsuccessfully, Ben Paulsen later singled through the right side on a hit-and-run, as Smith advanced to third. Hogan then belted a three-run homer to left field, his fifth long ball of the season and first since February 23 against Pacific, Clemson’s fifth game of 2007. It was also the Tigers’ first hit with runners in scoring position in the game, as Clemson was 0-for-11 in that situation before Hogan’s home run.

Smith, Paulsen, and Hogan each had two hits, as Clemson totaled nine hits in all. Parks led the Hokies with two of the team’s five hits.

Clemson will return home to play host to South Carolina on Wednesday at 7:15 PM.