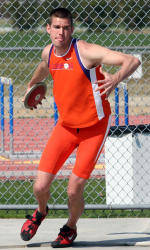 GREENSBORO, NC – North Carolina’s Laura Gerraughty and Duke’s Clara Horowitz were named Co-Performers of the Week on the women’s side, while Brent Hobbs of Clemson and Dominic Berger of Maryland shared the weekly honor for the men.

Hobbs collected a third place finish in the heptathlon at the Clemson Heptathlon/Pentathlon competition this past weekend. The senior heptathlete set a personal best in the event with a score of 5,427 points, meeting NCAA provisional qualifying standards. The performance by Hobbs, a native of Stony Point, N.Y., is the second best score reported at Clemson and is the third highest point total in the nation in 2006.

In her first competition of 2006, Gerraughty registered an NCAA automatic qualifying mark in the women’s shot put at the UNC Fast Times in Chapel Hill, N.C. this past weekend. The Tar Heel senior from Nashua, N.H. won the event throwing 59′ 5.5″, currently the best mark in the conference and in the nation.

At the Terrier Classic in Boston, Mass., Horowitz knocked 11 seconds off the previous Duke Indoor record (16:15.39) in the 5000m becoming the first Blue Devil to automatically qualify for the NCAA Indoor Championship this season. The Berkeley, Calif., native crossed the finish line in second with a time of 16:04.35, shattering her previous personal best of 16:23.53. The time by Horowitz sits as the fourth fastest in the nation and tops in the ACC.

Maryland’s Dominic Berger captured the men’s 60m hurdles at the Penn State National Open this weekend in State College, Pa. The sophomore hurdler went a school-record 7.79 to improve his NCAA provisional qualifying time in the event. Berger, a native of Mitchellville, Md., holds the top time in the ACC and is currently tied for the third fastest mark in the nation this year.