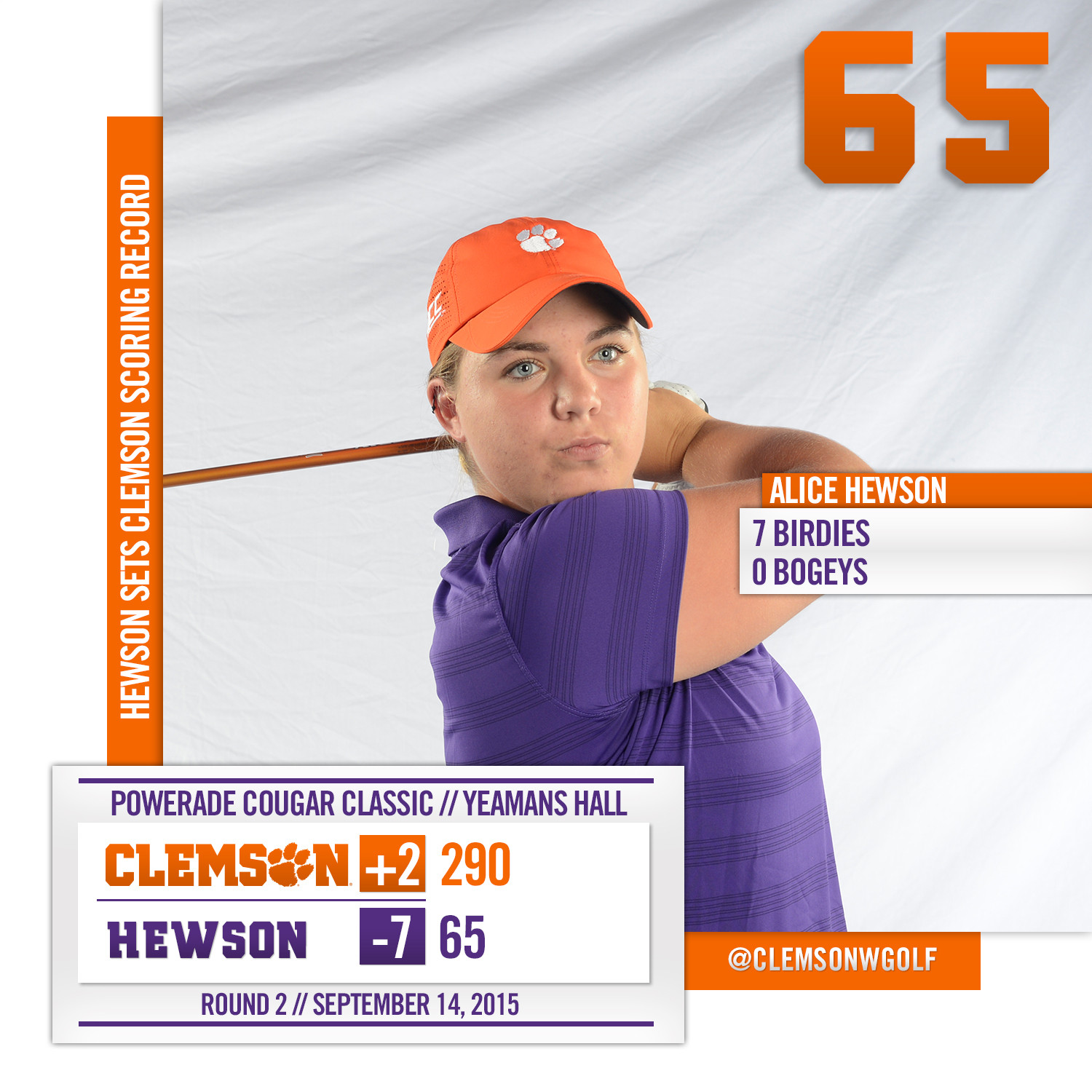 Clemson, S.C.—Alice Hewson broke the Clemson single round scoring record by three shots on Monday, and is tied for the individual lead after two rounds of the Powerade Cougar Classic at Yeamans Hall Golf Club in Charleston, S.C.  Hewson, playing in just her second round as a college golfer, fired a seven-under-par 65 on Monday.  Her eight under par total of 136 after two rounds is tied for the individual lead with Taylor Tomlinson of Florida.

The freshman from the United Kingdom  led Clemson to a 290 team score, seven shots better than Sunday’s opening team round 297.  The Tigers moved from ninth place to fifth after 36 holes with a 587 score for 36 holes.  Arkansas leads the competition with a 11-under-par 565 total .  The final round will be played tomorrow.

Hewson’s performance broke the previous Clemson record of 68, set by teammate Jessica Hoang on the same course last year, and by Ashlan Ramsey, who had three rounds of 68 on three different courses during the 2013-14 season.

“Alice played a flawless round of golf today,” said Head Coach J.T. Horton.  “She made crucial up-and-down shots when she needed to, but really she made it look easy most at time.  She is an explosive player as we can see (by her score).  I am happy for her.”

Sloan Shanahan had her second straight solid round with a one-over-par 73.  The junior had birdies on the par five ninth hole and the par five 15th, and had three bogeys in scoring her 73.  She had a 74 in the opening round and stands in a tie for 23rd place at three-over-par 147.

Sophomore Marisa Messana had a strong comeback on Monday and shot a two-over par 74.  Clemson’s best player at the end of last year had struggled to an opening round with an 83, but she was nine shots better on Monday thanks to a pair of birdies on par five holes on the back nine.

Freshman Lauren Stephenson opened with an even par 72 on Sunday, but started out five over par for her first six holes.  But the native of Lexington, S.C. settled down and was just one over par the last 12 to shoot a 78 for the day.

Hoang had a seven-over-par 79 to complete the competition for Clemson, who finished second at this tournament in 2013.