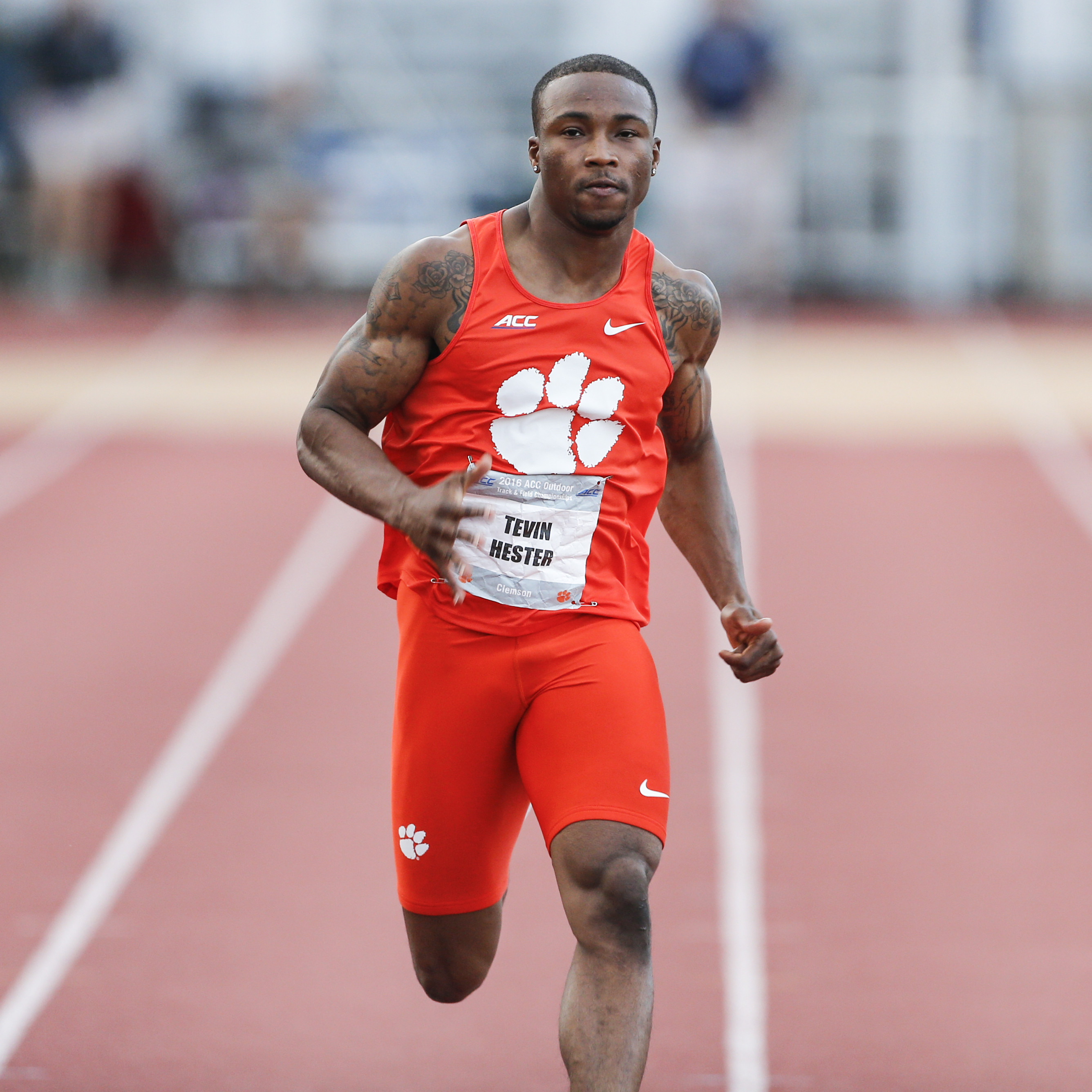 It didn’t receive near the attention it deserved. And that’s a shame.

Sunday evening, sprinter Tevin Hester etched his name into Clemson lore and put himself in select company within Atlantic Coast Conference track & field history. The man who entered his final ACC Championships as the prohibitive favorite in both short sprints didn’t disappoint.

First, it was time to defend his title in the 100-meter dash. Though not quite the sizzling time of 9.87 a year ago on Mike Long Track — it was only (gasp!) a 10.01 — Hester blew away the field nonetheless. He accepted his gold medal, did an interview with ESPN3 and waited about an hour for the last event of his storied ACC career, the 200-meter final.

With an anticipating crowd looking on, Hester came out of the curve in a different gear. He rocketed to a personal best 20.13, breaking his own ACC Championships record and nearly matching the Clemson standard of 20.09 set by former Olympic gold medalist Shawn Crawford.

Hester had achieved the unthinkable, a repeat sweep of the 100 and 200 at the ACC Outdoor Championships. The last time it was done prior to Sunday? You have to go back to 1988 when NC State sprinter Danny Peebles pulled it off. No sprinter in the illustrious history of Clemson and Florida State — the two schools that have produced every 100-meter ACC champ since 2000 — had ever won both events in back to back years.

But that all changed Sunday.

I’ve been the communications contact for our track programs since 2005, and Clemson has produced an unbelievable amount of talent during that time. Olympians. NCAA Champions. Record-holders. In my eyes, Tevin Hester placed himself firmly in the conversation as one of the top track athletes in Clemson history with Sunday’s performance.

Only three other men’s athletes in Clemson history won seven individual ACC titles (Hester made it four). But more importantly than the number is the humility with which he achieved it. In today’s day and age, coaching changes often lead to roster defections. It did in 2013, when a pair of standouts left the women’s program after LSU assistant coach Mark Elliott was tabbed to lead the Tigers.

Hester had just completed his first season at Clemson. The promising rookie out of Oxford, N.C., lost his head coach and sprint coach, the two men who recruited him, within the academic year.

To his credit, he stayed firm in his commitment to Clemson. He embraced the coaching transition when Elliott brought in former LSU coach Marvin Gibson to lead the sprint group. In his final two seasons under Gibson’s tutelage, Hester lost just once in eight individual ACC indoor and outdoor championship finals — the 60-meter dash in 2015 (by a mere four thousandths of a second).

Coach Elliott sent my graduate assistant and I a text message Sunday that read, “What more can you say on the men’s side? Tevin was the man of the meet.”

He certainly was, Coach. And hopefully as time passes, he’ll earn every bit of praise he deserves for the way he’s represented the Tigers during his brilliant career.