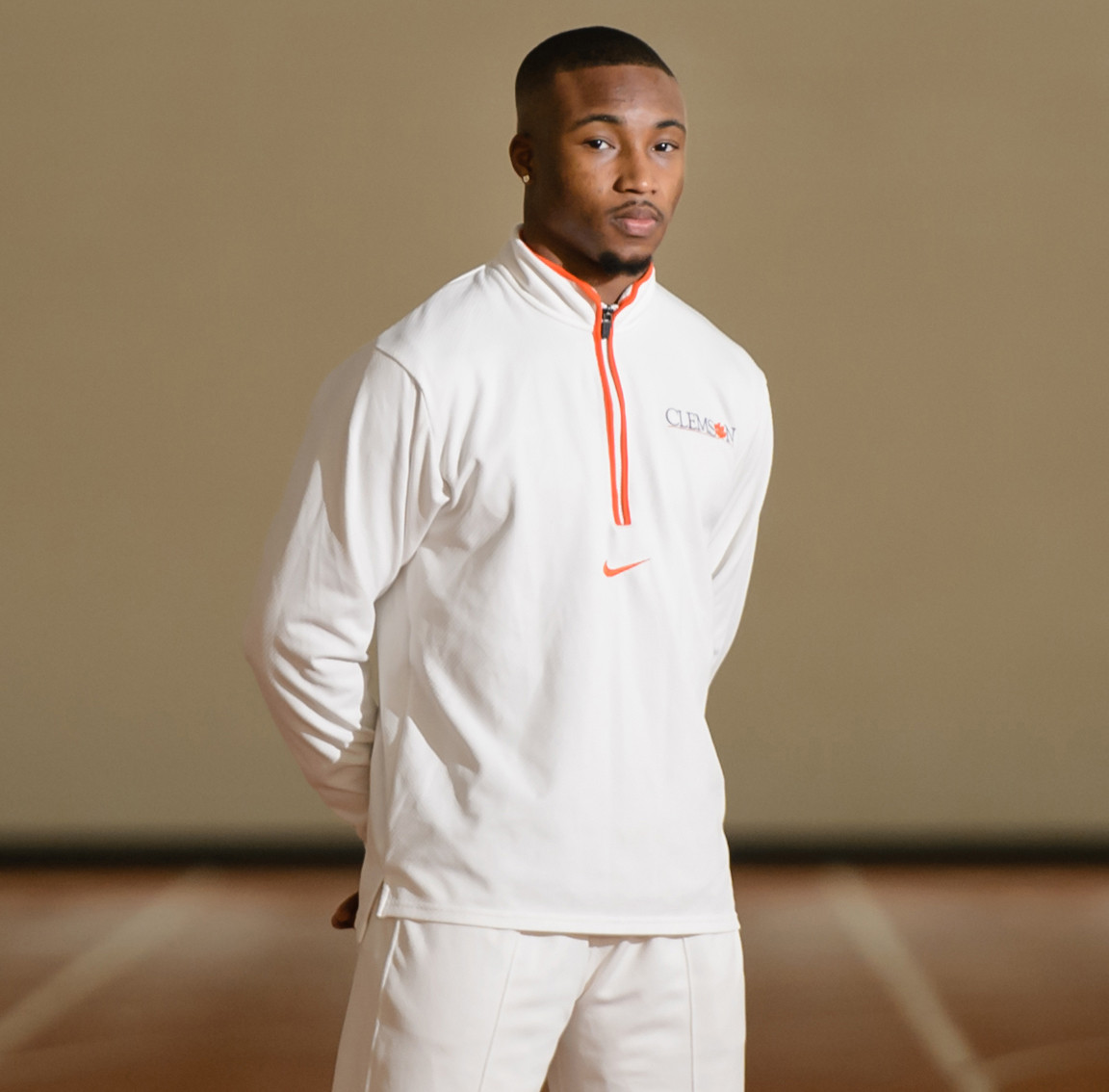 Note: The following article appears in the April issue of Orange The Experience, set to arrive in the mail for IPTAY members this week.

For the average person, being on Clemson’s all-time list of records ahead of C.J. Spiller and tied with Olympic gold medalist Shawn Crawford would give them a good reason for pause. But for Tevin Hester, who’s now tied for third all-time in Clemson’s books in the 60 dash following his performance at the recent ACC Indoor Championships, it gives him pause for a different reason: He’s surprised he’s not first.

Speaking with him before the ACC Championships, he had this to say.

“The records aren’t something I think about until I hear about it. Then I’m like, ‘Man, I’m only sixth?’ But it just goes to show the great athletes that have passed through here, and you can only respect that. I have the potential to be number one; I just have to put everything together and break through it eventually.”

The records he’s in contention for, the 60 and the 200 (where he ranks fourth), aren’t just Clemson records. They are also ACC records held by Jacoby Ford and Crawford, respectively. Upon first hearing Hester talk about his place among the greats, it might be a little surprising to hear how he felt about how he measured up. You quickly realize, though, that his words aren’t brash bravado, but instead a glimpse into the confidence he has in his ability and drive for success.

“I’m very privileged to be included with them,” he said. “Those are some great athletes, but at the same time, I want to knock them off of the top spot so I can be known as one of the greatest athletes to pass through Clemson.”

He notes his desire to be the best has been a trait that has always been there for him. He first noticed it when he was younger and cried every time he lost.

“It’s always to be the best,” he said. “No matter what I’m doing, whether it’s class, sports or being the best person I can be, I want to be the best and I have a lot of ambition to do that. Growing up, I learned that you had to lose, and after each loss you make adjustments and come back better.”

Despite only halfway through his junior season, Hester is already a remarkably decorated sprinter. His accomplishments include the 2015 ACC Indoor title in the 200, All-ACC and All-America nods, NCAA qualifications, and the chance to participate in the Junior Nationals.

His freshman season, he received the bronze in the 60 at the ACC Indoor Championships and as a sophomore, he won the silver. At this rate, it seemed only fitting that he would claim the gold in February, but he was narrowly edged out despite running a personal best 6.56. He did, however, gain some measure of respite by placing first in the 200 about an hour later.

His intense focus on achieving his potential has been one of the defining aspects of his time at Clemson. Despite drawing interest from a lot of different colleges, Hester says he picked Clemson because the coaching staff at the time was very much on top of things.

“They were strategic and technical in what they did,” he said. “When I went to visit other schools they weren’t as on top of things, they weren’t as organized and I didn’t really like that.”

He felt what was most important for him was to find a program that would help him have a plan going into college, and then also having coaches who would help him see that plan through during his time at Clemson.

This plan was slightly thrown off course, though, when the program saw a staff change.

“Initially, I was really worried when the new staff came here because I was unfamiliar with them,” he said. “I talked to my mom about it and really had to put it in my head to stick with it, because no matter who comes and goes you have to commit yourself. I committed myself to Clemson, so that’s my first priority. I don’t let one coach define me as an athlete.”

He also adds that he wouldn’t be where he is today without the support of his mother.

“My mom is my number one supporter; she’s always traveling to the meets wherever they are — even if it’s New York or Oregon — she’s always by my side.”

All of the success has not swelled to his head. When it comes time for the race, he’s entirely focused on what’s ahead of him.

“I never undermine people. My routine sometimes might throw a couple of people off, because I usually jump really high — and that’s kind of intimidating, I guess, because the crowd goes ‘Ooh!’ when I jump so high before getting in the starting blocks.”

He notes that lately he’s stopped doing that, in order to focus on conserving his energy. Plus, he doesn’t want to draw attention to himself and then come up short.

As the season transitions into the outdoor portion, Hester is not only focused on what is immediately in front of him, but also what is to come once the season is over.

“The summer nationals are in June. Hopefully if I can run fast enough, I’ll go to the trials for Team USA and try to make the world team.”

In his ongoing pursuit of greatness, he hopes to eventually compete at the highest levels — something he thinks about a lot.

“I made the Pan American Junior team for the USA after my freshman year. So if I can make the world team, I could be right along with the greats like Brianna Rollins, Shawn Crawford, and all the good people who ran here.”

But before he can get there, he’ll need to finish this season strong, which he defines as success not only for himself, but the team as a whole.

“We’re going to keep capitalizing each week and get better,” he said. “I can only see it going up from here; Coach (Mark) Elliott has done a great job bringing people in and positioning them to do the right thing for our program.”