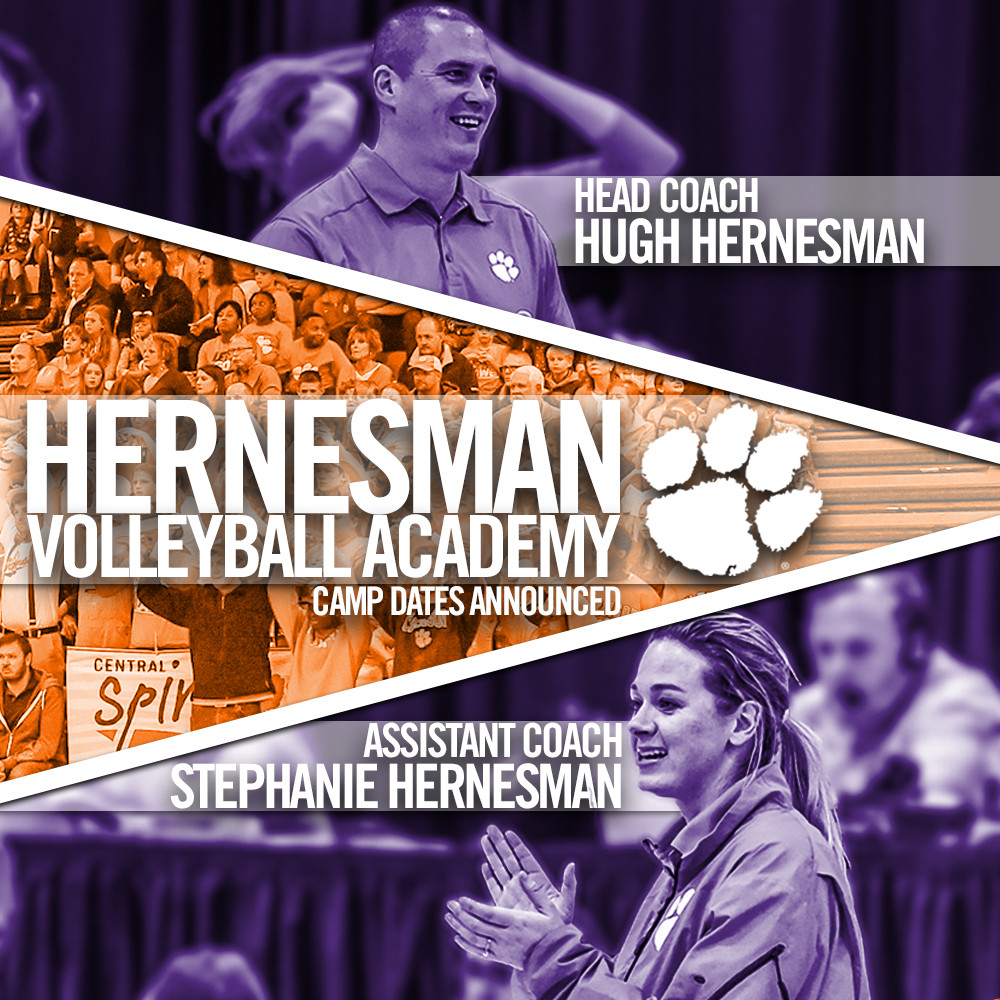 CLEMSON, S.C. – Volleyball student-athletes ages 13-18 are invited to take part in the Hernesman Volleyball Academy this summer with the first-of-nine camps set for May 14 and 15. Each camp offers a unique experience with Clemson University’s volleyball coaching staff for athletes of all skill levels.

Hugh and Stephanie Hernesman have combined for 37 years of coaching together at the collegiate level. The husband and wife coaching duo is coming off of its first season leading the Clemson Tigers after successfully rebuilding three programs.

At their most recent stop, it took the Hernesman’s just five years to bring Northwestern State to its first NCAA Tournament and claim its first Southland Conference Championship in 2014. In 2012 and 2013, their third and fourth years with the program, the Demons recorded back-to-back 20-win seasons. In 2013, Hugh and Stephanie guided the team to the most overall wins (21), most conference wins (15) and highest final RPI (98) in the program’s 32 years of NCAA Division 1 history.

Before becoming the Demons’ head coach, Hugh spent three seasons (2007-09) at Ball State as the first assistant coach and recruiting coordinator. His recruits, especially the 2010 class from which four of the five players went on to be named to the All-MAC team, were a significant factor in the Cardinal program’s improvements, which included a MAC title in 2010 and an NCAA Tournament bid in 2011.

Stephanie has used the experience she gained throughout her decorated collegiate career as a student-athlete to develop a number of the duo’s finest players, including one of collegiate volleyball’s best liberos in NCAA history. Stephanie played for Wisconsin-Whitewater from 1995-98, where she was three-time AVCA All-American. She helped lead the Warhawks to four NCAA Tournament appearances, including a Final Four berth in 1995, and three Wisconsin Intercollegiate Athletic Conference championships in her four seasons. Stephanie was inducted into the Wisconsin-Whitewater Athletic Hall of Fame in 2013.

ELITE CAMP | July 10-12This camp focuses on training athletes as if they will be moving on to the next level. All athletes will train and prepare like the athletes at the collegiate level. All athletes will be expected to train and compete at a high level, as all training will be geared toward elite athletes. New training ideas and techniques will be introduced. Athletes attending this camp will be expected to keep an open mind and come with the mindset to work hard.

Athletes will have the opportunity to apply skills acquired into evening competition. Athletes will be placed in groups of similar age and experience on the opening day.

POSITION CAMP | May 14-15, July 17-19This camp focuses on specialized training and skill development by position. Each athlete must choose from one of the following to train during the entire duration of camp: Setter, Pin Hitter (Outside or Opposite), Middle Blocker, Libero/Defensive Specialist

Athletes will have the opportunity to apply skills acquired in the three-day camp (July 17-19) into evening competition. Athletes will be placed in groups of similar age and experience on the opening day. Because of the short duration of the two-day camp (May 14-15), the camp will be focused exclusively on training. There is no scheduled competition at this camp.

TEAM CAMP | July 8-10, July 15-17This camp is designed to help prepare teams for their upcoming high school season. Teams will have the opportunity to compete against other teams from across the region prior to the start of the high school year. All matches will be officiated by a member of the Clemson camp staff.

High school coaches are allowed to coach their own teams and will receive complimentary housing upon registration of their team. Each team is required to have an adult coach accompany and remain with them at the camp. The coach will serve as the camp contact for the team. Clemson camps will communicate all instructions leading up to the camp through the adult coach.

DAY CAMP | July 13-15, July 20-22Individual camp sessions are designed to improve the fundamental skills of volleyball: serving, passing, setting, attacking, blocking, and individual defense. In addition, campers will work on team defensive and offensive systems. Campers will be placed into groups of based on their grade.

GENERAL SKILLS CAMP | July 13-15, July 20-22Individual camp sessions are designed to improve the fundamental skills of volleyball: serving, passing, setting, attacking, blocking, and individual defense. In addition, campers will work on team defensive and offensive systems. Campers will be placed into groups of based on their high school graduation year. Competition will take place during the evening sessions.