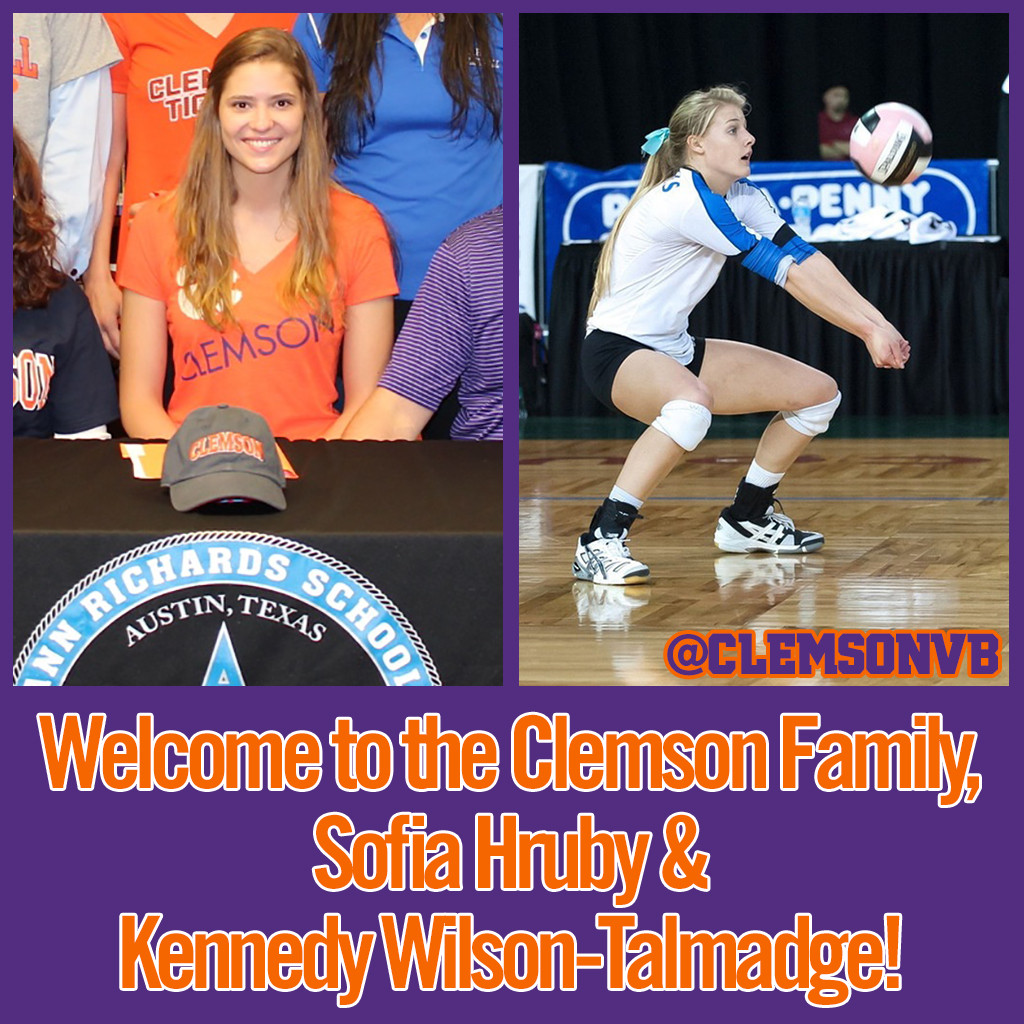 CLEMSON, S.C. – Head Coach Hugh Hernesman announced the signing of Sofia Hruby and Kennedy Wilson-Talmadge to the class of 2015 on Thursday. Hruby (Austin, Texas) and Wilson-Talmadge (Orlando, Fla.) are the first two signees that the Tigers have announced since Hernesman took over the program in March.

Hruby is a student at the Ann Richards School for Young Women Leaders, a prestigious high school in Austin, Texas. She was a two-time team captain at Ann Richards in 2013 and 2014, and the team claimed district titles in both seasons. Hruby earned all-district honors three times from 2012-2014 and was named to the academic all-state team in 2014. She also played for the Austin Juniors 18 Mizuno club team, which placed third at the Girl’s Junior National Championships in 2014 and earned an open bid to the Junior National Tournament in 2015 after a runner-up finish at the North Eastern Qualifier.

“We’ve been watching Sofia for the last three club seasons and believe we’re getting a very good athlete with a lot of room to grow,” said Hernesman. “Sofia is a dynamic athlete with good lateral speed and jumping ability. She plays for one of the best clubs in the state of Texas, so comes in with great experience and training. As Sofia adds strength and our training, I think we’re going to see her talents grow at a very fast rate. In addition to getting a great athlete, we are also getting a fantastic student. Coming from the prestigious Ann Richards School in Austin, she will be very prepared academically and understands the value of community service and character.”

Wilson-Talmadge’s high school team, The First Academy in Orlando, won the Florida Class 2A State Championship in 2010 and 2011, the 3A State Championship in 2012 and was the 3A State runner up in 2013. The three-year team captain was named to the all-district first team three times from 2012-14. She played club volleyball for the Orlando Volleyball Academy Asics Team from 2009-15, and was captain of that team in 2013-14. Wilson-Talmadge comes from an athletic family, as her sister, Jordan, is a rising junior on the volleyball team at South Carolina. Her father, Gary, played baseball at Georgia Southern and football at Georgia.

“Kennedy is someone that was committed to Clemson prior to our arrival and we were absolutely thrilled about it. We watched her play when we were recruiting for our last school and really liked her potential at that time,” Hernesman noted. “She is a great athlete with speed that will be an asset with our training style. Also, at 5’9”, she has the length and speed that can lead to great potential for defensive range.”