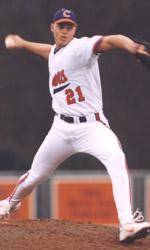 Matt Henrie turned in the longest outing of his career to lead Clemson to a 4-2 victory over North Carolina Saturday afternoon before a crowd of 3,015 at Boshamer Stadium. Clemson took the second straight game from North Carolina, who entered the weekend second place in the ACC, and improved to 7-0 against ranked teams. The Tigers improved to 30-3 and 7-1 in the ACC while dropping the Tar Heels to 24-13 and 9-5 in the ACC.

Henrie (7-1) was masterful, allowing just five hits after the first inning. He ended the day having pitched 8.1 innings, allowing two runs off seven hits while walking five batters and striking out six. He kept the Tar Heel bats at bay while the Clemson offense put up four runs in the sixth for all the runs it would need. Garry Bakker (4-2) picked up the loss for North Carolina.

The Tar Heels took a 1-0 lead in the first inning with a two-out rally. Sean Farrell singled to short left field and Chris Maples’ hit to right field landed just in front of a diving Jarrod Schmidt and trickled past the outfielder, allowing Farrell to score.

The Clemson offense awoke in the sixth inning with some help from North Carolina. Kyle Frank walked to lead off and Khalil Greene followed with a single to left field to put runners on first and second with no outs. After a Jeff Baker strikeout, David Slevin followed with a line drive that first baseman Ryan Blake barely got a glove on to prevent an extra base hit. Slevin’s hit put the Tigers ahead 2-1 with the bases loaded and still one out.

After a fielder’s choice, Steve Pyzik walked for another score and chased Bakker from the game. Reliever Whitley Benson entered the game and his second delivery to L.J. DeMaino was wild, allowing Slevin to score. DeMaino popped up to end the inning, but not after Clemson put up four runs.

North Carolina put together one last charge in the ninth. A hit by Chris Iannetta and a walk by Mell Adams knocked Henrie out of the game with one out. Reliever Tyler Lumsden hit the first batter he faced to load the bases and then walked Russ Adams to plate one run. Head Coach Jeff Hourigan, on the mound. Hourigan ended the rally with his third pitch, a ground ball to Baker that turned into a 5-3 double play to end the game. It was the second save of Hourigan’s career.

Greene led the offense and was the only Tiger with two hits on the day.

Clemson will go for the sweep Sunday against North Carolina at 1:00 PM.