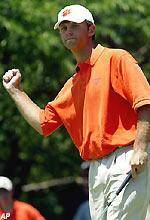 NORMAN, Okla. – Bank of America in association with The Friends of Golf (FOG), Colonial Country Club and the Golf Coaches Association of America (GCAA), has announced the 10 semifinalist for the 2004 The Ben Hogan Award. The Hogan is presented annually to the top men’s NCAA Division I, II or III or NAIA golfer, taking into account all collegiate and amateur competitions during the last 12 months.

The 10 semifinalist include Florida’s Matt Every and Camilo Villegas, Bill Haas from Wake Forest, Clemson’s Matt Hendrix, Washington’s Brock Mackenzie, Ryan Moore of UNLV, Arizona’s Chris Nallen, Chris Stroud of Lamar, Peter Tomasulo of California and Oklahoma State’s Casey Wittenberg. Haas and Moore were finalist for the award last year while Nallen was named to the semifinalist list. Every, Moore, Nallen, Stroud and Wittenberg have been named to represent the United States at the 2004 Palmer Cup presented by Monster.

The Hogan Award selection committee will name five finalists on April 27. The winner of The Hogan Award will be announced on May 6 and the presentation banquet will be held at Colonial Country Club on May 17, the Monday prior to the Bank of America Colonial.