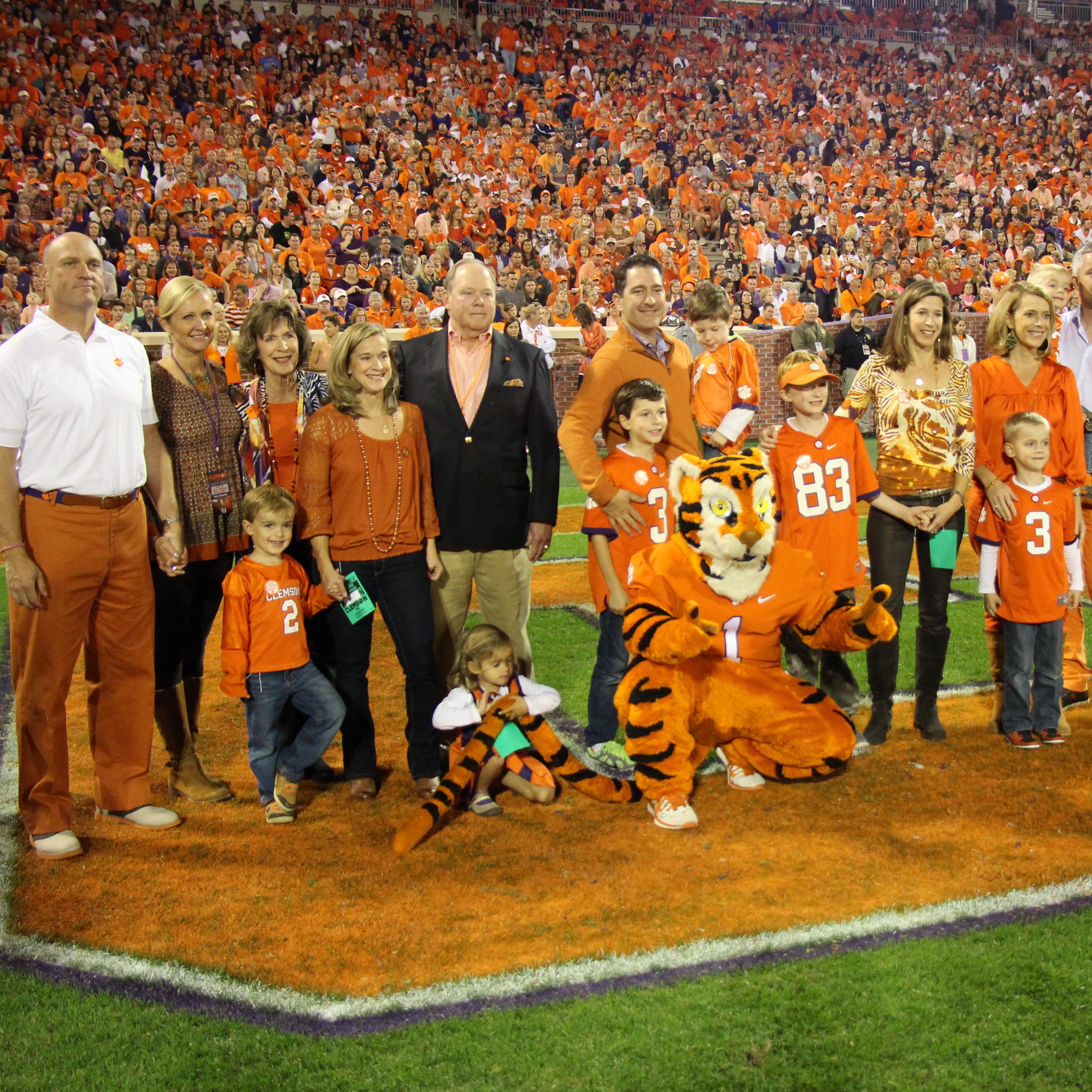 CLEMSON, S.C. – As Clemson athletics embarks on a transformation of its athletic facilities, including upgrades to Memorial Stadium and a new football operations center, longtime supporters Leon J. “Bill” Hendrix, Jr., his wife Pam Hendrix and their children Jill, Joy, Holly and Jim (all Clemson graduates) have made the first cornerstone gift of $2.5 million towards the facilities projects. Mr. Hendrix was the student body president in 1963, received the Clemson Medallion in 2009, and has served on the Clemson Board of Trustees since 1995 and was chairman for three terms from 2003-09.

The Clemson Athletic Cornerstone Program is a vital part of the new athletics facilities initiative. With new facilities, upgrades or rebuilds planned for football, basketball, baseball, tennis, soccer and Vickery Hall, it will be the most comprehensive change to the facilities of athletics ever undertaken at Clemson.

“Trustee Hendrix, his wife and children continue to step up in leadership and love for Clemson, setting a benevolent example for others. They are truly ‘All in,'” said President Jim Clements. “It is with deep gratitude that we accept this gift that will improve Clemson forever.”

The Hendrix Family Cornerstone Gift is the largest single pledge to Clemson Athletics, and is one in a long line of donations made by the Hendrix family. Their total Clemson University giving has eclipsed $5 million, and has established or benefited such programs and facilities as the Hendrix Student Center, the Hendrix Family Endowment for the Office of Student Body President, the President’s Leadership Circle and the Pamela Maddex Hendrix Dream Jar Study Abroad Endowment.

In support of the Clemson football program, the Hendrixes were partners in the construction of the WestZone and the Indoor Practice Facility, and they endowed a scholarship for the team’s placekicker.

“Bill and Pam, along with the entire Hendrix family, have deeply impacted the Clemson campus in many positive ways for many years,” IPTAY CEO Davis Babb said. “The first Cornerstone gift is a significant step for our programs and we sincerely appreciate their passion and support for Clemson athletics.”

This cornerstone gift is part of Clemson University’s “The Will to Lead” capital campaign to raise $1 billion to support Clemson students and faculty with scholarships, professorships, facilities, technology and enhanced opportunities for learning and research.

·       Hendrix Family Endowment for the Office of Student Body President

·       The Kicking Position Endowment in Football

Hendrix was Clemson’s student body president and earned a bachelor’s degree in 1963 and a master’s degree in 1968. He has served on the Clemson Board of Trustees since 1995 and was chairman for three terms from 2003-2009.

Bill and Pam married in 1967 and have four children who are Clemson graduates: Jill Ganzenmueller (’92), Joy Yonce (’93), Holly Cirrito (’95), and Jim Hendrix (’98). (Like his father, Jim served as Student Body President as an undergrad.) Their daughter-in-law and one son-in-law also graduated from Clemson. They have 10 grandchildren.

Hendrix has held many volunteer leadership positions for the university, serving on the Alumni National Council, as an IPTAY representative, on the Clemson University Foundation board of directors and on the Board of Visitors.

In 2008 Clemson honored him with the university’s highest public award: the Clemson Medallion. Clemson also recognized him in 1995 with the Alumni Distinguished Service Award and in 2001 with the Institutional Advancement Award.