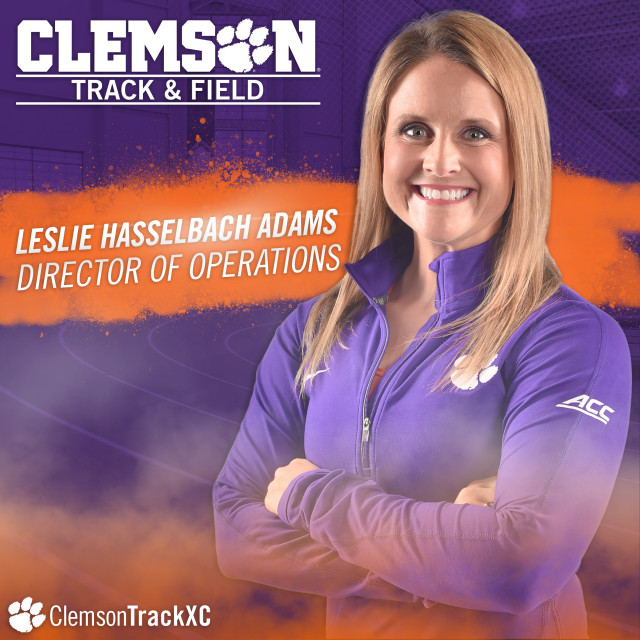 “I’m really excited to join the track & field family,” said Hasselbach Adams. “I’d like to thank Coach Elliott for giving me the opportunity and bringing me into the program. It’s been a lot of fun for me getting to know the staff and the student-athletes. We have wonderful student-athletes and I’m so happy to be a part of the program. I couldn’t be more excited to hit the ground running with them.”

“I’m thrilled to have Leslie on board as the Director of Operations for our program here at Clemson,” said Elliott. “When Leslie was the coach of the diving program, I was very impressed with her. She was one of the first coaches I ever met when I first came. She has a lot of experience working with student-athletes, the business aspect of running a program, and how to deal with recruiting and all that entails. For me, this was one of the easiest decisions I’ve ever had to make as a college coach.”

Hasselbach Adams earned her bachelor’s degree in Early Childhood Education and Elementary Education with an emphasis in Social Sciences from the University of Toledo in 1999. She graduated from Clemson in May 2008 with a master’s degree in Guidance and Counseling with an emphasis in Student Affairs Administration. Additionally, Hasselbach Adams recently graduated from the NCAA Women’s Coaches Academy in Denver, Colorado.