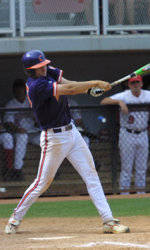 Kris Harvey had a monster week as a hitter and pitcher for the Tigers and was named one of Collegiate Baseball’s Louisville Slugger National Players of the Week. On offense, he belted 3 home runs with 10 RBIs in four games as he went 6-for-13 at the plate with three of the four games against then #9 ranked North Carolina. On the mound, he pitched 7 scoreless innings of one-hit ball to earn a win against #9 North Carolina. He did not allow a runner past second base.

Harvey single-handedly drove in more runs (10) than the opponents scored runs (7) on the Tigers during the four-game week. For more on Baseball’s Louisville Slugger National Players of the Week, visit www.baseballnews.com