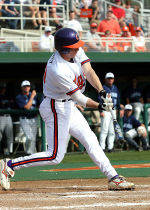 Harvey, a junior from Catawba, N.C. went 6-for-13 (.462) with two walks, five runs scored, a double, three home runs and 10 RBIs in four games, including three games against North Carolina. Against Furman on Wednesday, he went 1-for-2 with two runs scored, a home run and three runs batted in. In game one against the Tar Heels, Harvey collected a hit in three at-bats while driving in the team’s only run. In game two, he hit a pair of solo home runs and scored three times as Clemson downed North Carolina, 9-1 on Saturday. In the series finale, Harvey hit .500 (2-for-4) with a double and four RBIs in the Tigers’ 4-3 win.

Miller ran his record to 5-0 this season with seven innings of two-hit ball in the Tar Heels’ 2-1 win over Clemson on Friday. The lefty allowed just one unearned run and struck out 11 for the third double-digit strikeout game of his career and second this season. Miller carried a no-hitter into the sixth inning for the second time this season. In six starts this year, the sophomore from Gainesville, Fla. has allowed just three earned runs and sports a 0.69 ERA. He has accumulated 49 strikeouts in just 39.1 innings of work, while holding opponents to just a .194 batting average.