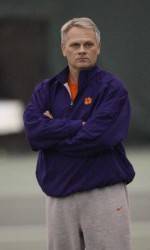 CLEMSON, SC–Clemson Head Men’s Tennis Coach Chuck McCuen announces the signing of Hunter Harrington to a National Letter of Intent to play tennis at Clemson beginning in the fall of 2011. Harrington, one of the country’s top junior players, is from Spartanburg, SC.

“I am excited about Clemson for so many reasons,” said Harrington. “First, I am very impressed with the coaches. Coach McCuen and Coach Boetsch are incredible coaches and I really feel that they have the ability with their positive coaching to take Clemson to the next level. The team seems to get along great with one another and everyone is working toward the same goals. Next, the facilities are great and I love the location of the courts, which encourages students to come and watch the matches. The strength training and conditioning area is also the best of any school that I visited. Finally the atmosphere at Clemson is second to none. When you walk around campus, everyone is wearing orange and is completely dedicated to this school. Clemson is built on tradition. I will be a third generation Clemson Tiger with both of my grandfathers and my mom being Clemson graduates. This is a tradition that I am excited about continuing,” said Harrington Harrington is a blue chip recruit according to the Tennis Recruiting Network, and has been ranked as high as #10 in the country in his class. Harrington is from Spartanburg, SC, and is currently training in Boca Raton, FL at the USTA National Training Center.

“Being invited to train at the USTA National Training Center was really a huge opportunity for me to get some of the best tennis training in the world,” continued Harrington. “I am extremely grateful for all the USTA has done for me and my tennis. Although it was difficult moving away from home, I have had so many great opportunities that I would have never had if I had continued training soley in Spartanburg. I had the opportunity to represent the United States at the Junior Davis Cup in Mexico. I spent a month in South America practicing on red clay and participating in tournaments in Chile, Argentina, and Paraguay. I have worked extensively with Mark Merklein and Ricardo Acuna, who are both excellent coaches and tennis players. I have also had the privilege to work with Jay Berger, a Clemson Alum, who is now Head of Men’s Tennis for the United States Player Development Program,” said Harrington.

“When I was young, my parents always taught me the importance of setting goals and then working hard to achieve those goals. After I decided that I wanted to be a tennis player, my family was very supportive of my dreams in tennis and they did whatever was necessary to help me become a better, more competitive player. My coaches in Spartanburg are Anthony Stewart and Jim Carrara. I still frequently talk to them and they still have a great impact on not only my tennis game but me as a person,” said Harrington.

“We are very excited about Hunter joining our program next fall, and can’t wait to work with him,” said Clemson Head Men’s Tennis Coach. “We have truly enjoyed getting to know the Harrington family during this process. Hunter is a young man of tremendous character, and his work ethic is second to none. Hunter has had great coaching during his time at the USTA Training Center with coaches Mark Merklein and Ricardo Acuna.

“Also, Coach Boetsch and I are very impressed with Hunter’s coaches from Spartanburg, SC, Anthony Stewart and Jim Carrara. We are thrilled that Hunter is staying close to home and joining current players Wesley Moran, Cal Hilsman who were all #1 in the state of South Carolina in junior tennis. Hunter has high goals for college tennis and beyond, and we look forward to helping him achieve them,” said McCuen.