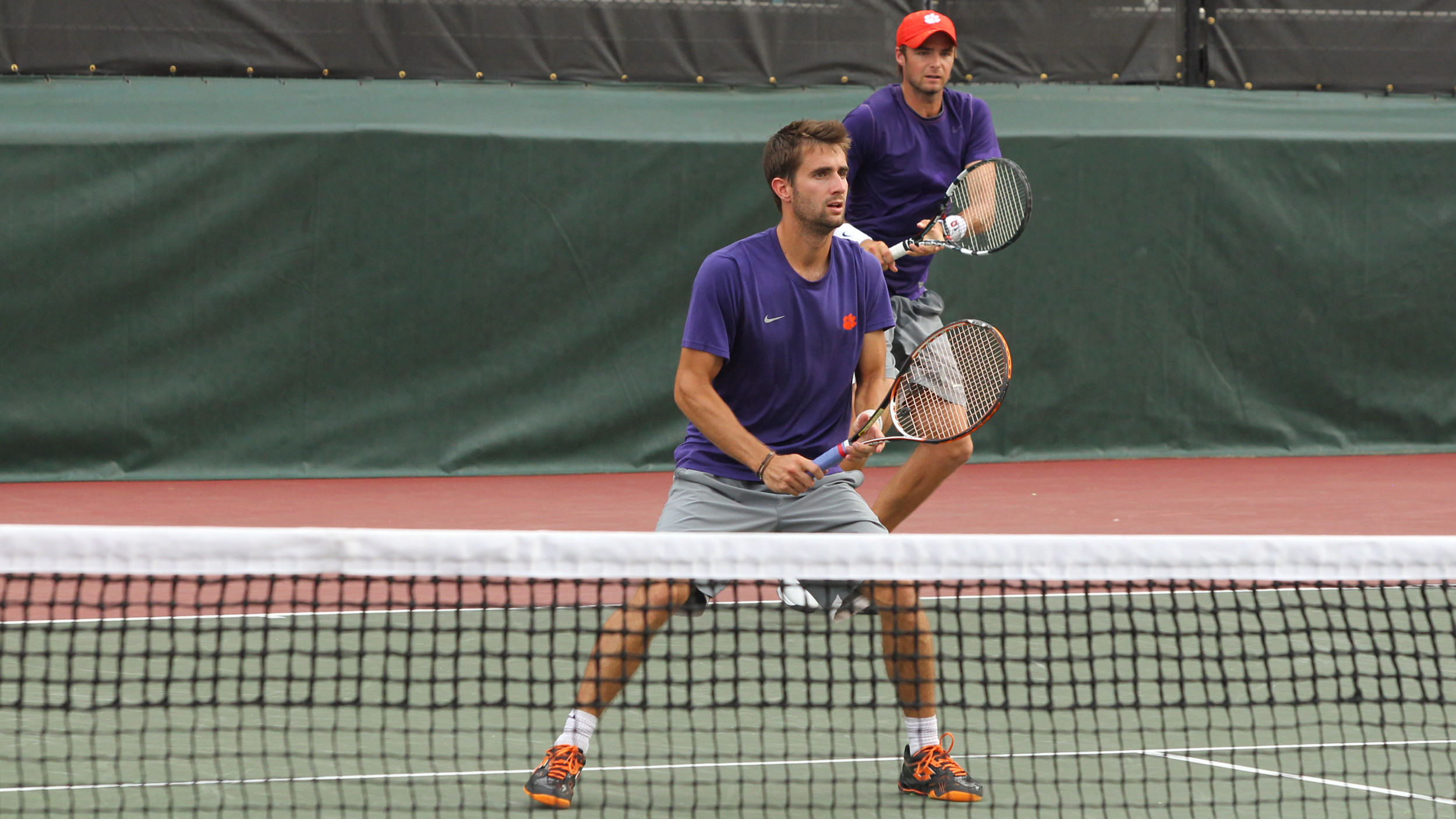 ATHENS, Ga. – Hunter Harrington and Dominique Maden‘s impressive run in the NCAA Doubles Championships came to an end on Sunday in the NCAA Semifinals. The Tigers’ ninth-ranked duo fell to the No. 2 National Seed Mikelis Libietis/Hunter Reese of Tennessee, 6-4, 6-2, at the Dan Magill Tennis Complex in Athens, Ga.

Harrington and Maden’s tournament run included wins over the fourth and fifth-ranked doubles teams in the nation, and saw them earn ITA All-America honors for 2014 by virtue of their berth in the NCAA quarterfinals. They became just the third doubles team in Clemson history to reach the semifinals of the NCAA Doubles Championships, as two Tiger teams had done so previously, in 1987 and 2004.

The junior from Spartanburg, S.C. and the senior from Stuttgart, Germany conclude the 2014 season with a 31-4 overall record. The .886 winning percentage maintains their place at the top of the Clemson record books in terms of single season winning percentage by a doubles team, while they rank third in program history in single season doubles wins.

Maden finishes his Clemson career with two ITA All-America honors (2013 and 2014) and a Second-Team All-ACC award (2014). He graduated from Clemson in May 2014 with a degree in Marketing and a cumulative GPA of 3.76, which earned him a spot on the All-ACC Academic Men’s Tennis Team, as well as the ACC Academic Honor Roll on multiple occasions.

ATHENS, Ga. – Hunter Harrington and Dominique Maden recorded their second upset of a top-5 team in three days on Saturday afternoon in the quarterfinal round of the NCAA Doubles Championships. The Clemson duo defeated #4 Gonzales Austin and Ryan Lipman of Vanderbilt (the No. 3 National Seed), 6-4, 6-4, to advance to Sunday’s NCAA Semifinals.

Harrington and Maden play #2 Mikelis Libietis and Hunter Reese of Tennessee (the No. 2 National Seed) on Sunday, May 25 at 4 p.m. Libietis and Reese defeated #28 Gregory Bayane and Chase Melton of California, 7-5, 6-3, on Saturday.

ATHENS, Ga. – One day after upsetting the fifth-ranked doubles team in the country, Hunter Harrington and Dominique Maden won their match in the NCAA Doubles Championships Round of 16 to advance to the tournament quarterfinals. The duo, currently ranked ninth nationally, defeated #42 Alexis Heugas and Nick Jones of VCU, 6-4, 7-6(3), on Friday afternoon at the Dan Magill Tennis Complex in Athens, Ga.

Harrington and Maden face #4 Gonzales Austin and Ryan Lipman of Vanderbilt (the No. 3 National Seed) on Saturday, May 24. Austin and Lipman defeated #17 Jordan Angus and Malte Stropp of Mississippi State, 7-6(6), 3-6, 6-4, in the Round of 16. The quarterfinal match is scheduled for 3 p.m.

WATCH NCAA ROUND OF 16 MATCH POINT:

Harrington & Maden Advance to NCAA Doubles Round of 16

ATHENS, Ga. – Junior Hunter Harrington and senior Dominique Maden defeated 5-8 Seed Ross Guignon and Tim Kopinski of Illinois in three sets on Thursday afternoon in the first round of the NCAA Doubles Championships at the Dan Magill Tennis Complex in Athens, Ga.

The Tiger duo, ranked ninth nationally in doubles according to the most recent ITA poll, dropped the first set to Guignon and Kopinski, but came back strong in sets two and three, winning 3-6, 6-2, 6-1. The Illini team was ranked fifth in the ITA doubles rankings.

ATHENS, Ga. – Junior Hunter Harrington fell in three sets in the Round of 64 of the NCAA Singles Championships on Wednesday morning at the Dan Magill Tennis Complex in Athens, Ga.

Harrington, ranked 48th nationally, took the first set over Daniil Proskura of Alabama, however, the Tide’s 26th-ranked player won the next two sets (4-6, 7-6(5), 6-4) to advance to the second round of the singles draw. Harrington finishes the season with a 24-13 overall record in singles.