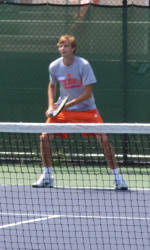 He will find out who his opponent is later when the qualifiers are placed into the draw. The ATP future tour in the USA includes recently graduated top college players, highly touted junior players, career journeymen and veterans making a comeback. Almost all of the players in the main draw will have an ATP rank and many with ranks higher than 1000. If Harrington were to win his first round match then he would earn his first ATP point, which would give him an ATP professional rank.

Harrington and former Tiger standout Kevin Galloway will also be pairing up to participate in the doubles portion of the tournament.

“Hunter played his best match of the qualifying tournament today and continues to grow with each match,” said Clemson Head Coach Chuck McCuen.

“We are excited about him getting through to the main draw in both singles and doubles (with former Clemson player Kevin Galloway). Hopefully he can keep building steam, and he and Kevin can bring some ATP points back to Clemson!” said McCuen.

“I am excited about the opportunity in front of Hunter and Kevin today. They have improved every match and had to battle through some tough matches. This is the type of situations we try and put our student/athletes in to further their tennis careers. One of our Seniors last year Derek DiFazio played this tournament and got an ATP point. One of our program’s goals for the fall season is for our student/athletes to have chances to earn ATP points during their time at Clemson. We are working hard to try and help these guys reach their personal goals in the sport and it is an exciting thing to do., said Chuck McCuen“