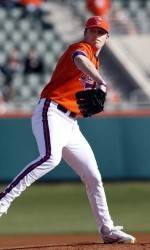 Casey Harman and Doug Kingsmore Stadium on Friday night. Clemson, who took a 1-0 series lead, improved to 15-2 overall and 4-0 in the ACC. With Georgia Tech’s loss at Maryland on Friday night, Clemson became the last unbeaten team in ACC play. The Hokies dropped to 13-6 overall and 2-2 in the ACC.

Harman (4-0) earned the win by tying his career high with 7.1 innings pitched. He allowed just one hit, a single in the sixth inning, no runs, and three walks with four strikeouts. David Haselden pitched the final 1.2 innings without allowing a hit or run to record his first career save. The two Tiger hurlers tossed the one-hit shutout against a team that entered the game with a batting average of .354 and was averaging over nine runs per game.

Hokie starter Justin Wright (2-3) was nearly as unhittable despite suffering the loss. In 5.2 innings pitched, he yielded just two hits, two runs, and a career-high five walks with six strikeouts.

The Tigers dented the scoreboard first in the third inning. Will Lamb led off with a double to left-center, went to third on Chris Epps’ groundout, and scored on Mike Freeman’s sacrifice fly to right field.

Harman gave up his first hit with two outs in the top of the sixth inning when Sean Ryan bounced a single up the middle. Austin Wates followed with a walk, but Harman got Anthony Sosnoskie to ground out to keep the Tigers ahead 1-0.

In the bottom of the sixth inning, Kyle Parker drew a one-out walk and advanced to second on Wilson Boyd’s single to left field. After Brad Miller loaded the bases with a walk, John Hinson walked to plate Parker. But the next two Tigers were retired to keep the Hokies behind by only two runs.

Clemson added to its lead in the eighth inning. Boyd reached with one out on an error. Miller followed with a single through the right side as Boyd was running on the pitch. Boyd tried to score all the way from first on the play but was retied at the plate 9-6-2 for out #2. Hinson then kept the inning alive when he reached on another error and John Nester loaded the bases with an infield single. Lamb then walked on a 3-2 pitch to score Miller, giving Clemson a 3-0 lead.

In the ninth inning, Wates reached for the fourth time in the game when he led off with a hit-by-pitch and Sosnoskie walked. After Michael Seaborn popped up for out #1, Ronnie Shaban walked to load the bases. Mike Kaminski struck out looking for out #2, then pinch-hitter Buddy Sosnoskie struck out to end the game.

Lamb, a native of Seaford, VA, had the game’s lone extra-base hit (double), scored a run, and had an RBI from the #9 spot in the batting order. Miller also went 1-for-2 with a run and two walks for the Tigers, who had four hits in the game.

Ryan had the Hokies’ lone hit, while Wates was 0-for-0 with two walks and two hit-by-pitches.

Clemson’s 3-0 win on Friday marked the Tigers’ first shutout against an ACC team since March 23, 2008 when the Tigers blanked N.C. State 2-0.