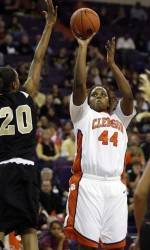 CLEMSON, SC – Clemson used a 27-7 run to turn a one point deficit into a 19-point lead as the Lady Tigers defeated the Furman Paladins, 68-48, at Littlejohn Coliseum to open the 2009-10 season on Friday night.

The Lady Tigers (1-0) were led in scoring by Lele Hardy with 19 points while sophomore Shaniqua Pauldo also posted double figures with 17. Hardy also led the team in rebounds with 11, and also added six steals for good measure. Hardy is just 34 steals shy of the school career record. The Tigers had 29 offensive rebounds as well, in avenging a loss to the Paladins a season ago. The Tigers move to 20-3 all-time against Furman.

Clemson used a tough defense to hold the Paladins to only 29.1% shooting while forcing 28 turnovers on the night. Kaitlin Murphy came off the bench to lead the Paladins with 11 points. Lee Stephens added 10 points for Furman while Susan Troutman led the team in rebounds with 11.

Trailing 18-17 at the 6:24 mark of the first half, Clemson used a team effort to go on a 27-7 run that covered just more than 10 minutes. Seven different players scored a basket during the run, led by Hardy with nine.

“We were getting shots early,” said Coach Cristy McKinney. “In the second half, we just picked up the intensity defensively and were able to start knocking down some shots.”

Six Clemson players scored in the first half and the Lady Tigers held Furman to only 25% (8-32) shooting. Clemson held a 33-23 advantage at the break behind 14 first half points from Hardy.

The Lady Tigers will travel to the College of Charleston for their road opener Monday. The teams are scheduled for a 7:00 pm tipoff.