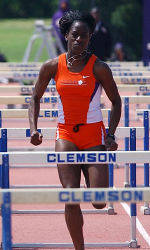 Clemson, SC – Polly Hardy and Patricia Mamona of the Clemson women’s track & field team earned invitations to the NCAA Outdoor Championships, which will be held June 11-14 in Des Moines, IA. Mamona has qualified for the meet in consecutive years in the triple jump, while Hardy will be making her first-ever trip to the national meet in her final attempt.

“I am ecstatic about the two young ladies that will represent the women’s track & field program next week,” said Marcia Noad, a former jumper and hurdler at Clemson who is in her eighth season as the head coach of the Lady Tiger program. “Patricia and Polly have worked extremely hard to achieve the success that they have experienced this season. I believe that we will finish out the year with exemplary performances from both of these young ladies.”

Hardy, a senior out of Anderson, SC, was an at-large selection for the 100m hurdles after a strong sixth-place finish at last weekend’s NCAA East Regional. Hardy turned in a personal best 13.44 in the prelims, then ran 13.54 in the finals for the highest regional finish of her career. With her selection to the field, she becomes only the second high hurdler in Clemson women’s history to advance to the NCAA Outdoor Championships. Nikkie Bouyer (1996, 1998) is the only other Lady Tiger high hurdler to compete at the sport’s top event.

Hardy is a three-time East Region qualifier in the 100m hurdles and has put together a solid senior season. In arguably the most competitive conference for high hurdles, Hardy placed fifth at the ACC meet in April. She then ran against even more of the nation’s best in the event at regionals and had a career-best showing. Hardy’s time of 13.44 ranks in a tie for second in Clemson history with Kyana Elder, who competed at Clemson from 1999-2002.

“Polly has improved her performances each year since her freshman year and it would be great for her to finish her career as an All-American and Clemson’s all-time performance leader in the hurdles,” Noad said. “Polly is a true success story of what you can do with patience and a lot of hard work and dedication.”

Mamona earned an automatic spot in next week’s competition by virtue of her fifth-place East Region finish in the triple jump. The sophomore from Lisbon, Portugal improved on her personal best with a top jump of 43’11.25″, which ranks second in school history behind former All-American and NCAA champion Gisele Oliveira.

“Patricia is on the verge of a big breakthrough in the triple jump,” Noad believes.

Mamona made the trip to Sacramento, CA for last year’s outdoor national meet and finished 11th. She was 12th at the NCAA Indoor Championships in the triple jump earlier this year, and is four-time All-ACC (including indoors) and two-time All-East Region in the event as well.